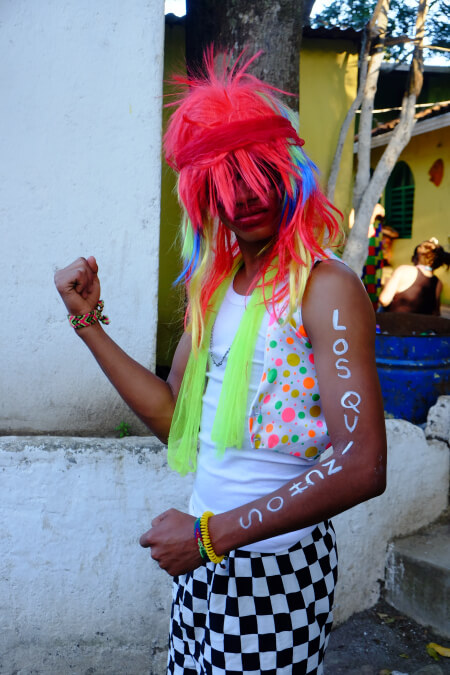 What a tour it’s been

During my time on this PWB tour I have: had my hair cut twice, moved location 5 times, left the house on time once, got frustrated about leaving the house late over 100 times and enjoyed every one of the 98 days I have spent in Nicaragua. As we round off the last week of this tour the team are all extremely sad to be saying goodbye to each other, the country and the people we have been working with in Granada.

True, there are some things I won’t miss about Nicaragua, it’ll be nice to have running water and electricity working consistently, I’m looking forward to being able to sleep in a bed rather than a hammock and I’m really excited about food that isn’t fried and salted to within an inch of it’s life. However, for every reason to want to be at home there are many more reasons to want to stay here.

To be fair hammock sleeping hasn’t been all bad….

We have now performed our show over 30 times, to crowds ranging from 20 – 800 people, and I have thoroughly enjoyed each and every one of them, even if the use of “Killer Queen” in our acro means I now instinctively start to do a cartwheel when I hear the intro! We’ve consistently added to and improved our show and looking at the video of our first show is a reminder of how far we’ve come. The club passing routine is probably the biggest improver, since we only had 10 days in January to go from meeting each other to having a stage-ready show there wasn’t much time to practice any of the routines as much as we would like. No matter, you can get away with a hoop routine where the performers aren’t perfectly in time but with club passing is much harder since you’re throwing the props at each other! Thankfully it didn’t take long before the tricks were solid, transitions slick and improvements were being made.

Teaching the workshops has been an experience like no other. We have worked extremely well as a team to provide workshops on so many aspects of circus and performance, on everything from clowning to acro. Undeniably there have been hard days. Days when my Spanish has been simply not good enough to explain an intricate part of a back somersault. And days when we’ve arrived to find no kids to teach because water supplies at the orphanage have run out. But collectively we have engaged our admittedly limited brains and helped the kids produce a brilliant show at each of the locations we have been working.

Paddy getting exited during our first ever workshop!

We have also taught each other loads, after a few painful hours I can now crack a whip thanks to Karen’s teaching, I have seen Emer and Graham develop a love for hat manipulation thanks to Paddy. And, Oihana and Bea have improved their passing heaps.

For me the single best thing about this country, and what has made this tour such an incredible experience, is the people. I have made 6 new friends for life going by the names Oihana, Paddy, Karen, Bea, Emer and Graham. As a team we have met circus performers not only from all around Nicaragua, or even Central America, but from around the world. Just one example of this is when one day we were sitting waiting for a bus and from across the street we saw a guy wearing a shirt from a juggling convention in Germany! We shouted him over and the conversation went something like this:

Him: “Thanks that would be great!”

Then our bus came and we left.

But we did see him again, armed with only the fact we were called Performers Without Borders he had researched where we were teaching and came along to see us teach a workshop and perform a show the next day!

We have met performers from all corners of the world, but our collective favourites have been the Nicaraguans. A key part of the PWB ethos is to make itself obsolete, that is PWB believes in setting up systems for locals to teach like we do when we’re not on tour. The aim is to “teach the teachers” and eventually PWB is no longer necessary in that place. Because of this we have got to know a groups of performers from Nicaragua very well since they will be continuing to teach after we leave.

Since it’s the end of the tour and we’ve all been getting sentimental I’ve asked each of the team about their favorite day / aspect of the tour. Here’s what we all said:

Oihana: Mmmm… having the team plotting very secretively to make me an amazing birthday day left me in tears of happiness and the horseback ride on the beach during the sunset made me feel free and wild and almost fly (literally). I have some special moments printed on my heart with the kids too, their smiles and cheekyness, being able to understand them made the experience even greater. Oh! And all the rides on packed buses dancing and discovering the popular music, the freedom, the wind and the beautiful scenery that we had while riding on open trucks, the massive fun inside the tiny rickshaws and taxis… All the dances, and more dance and did I mention dance! And my first day swimming (or fighting with the epic waves, I would say…) in the Pacific ocean was soooo nice! And my first time swimming on the lake in Ometepe island… and the other day that we went to the beach with the Nicaraguan performers and today after the show when we went to the lagoon.

Paddy: One of my favorite moments on tour was one Saturday morning in Leon when the house was being fumigated and we had to eat breakfast outside. The night before I may have been salsa-ing a little too hard and went to curl up in my chair to feel sorry for myself, forgetting it was a rocking chair. I hit the dirt (which there was a lot of) in quite a serious way and lots of laughter ensued.

Karen: The first big group show we did in Leon with the “zanquistas” stilt walkers, the guys from El Nido de las Artes and us. We did a big parade down to the cathedral and got to see the skills these other performers had, we also had a giant crowd! Other favorite moments were (almost) crowd surfing on a bunch of school kids, who then made us sign autographs for over 30 minutes after a show in Managua. I also really enjoyed the first big trek we went on with the kids from Barrilette to the Barrio 30 minutes away. There was about 25 kids including 10 or so under 5, and us hiking through a rubbish dump, up a hill and into a really poor barrio built on top of an old dump, the view from the hill was amazing and the kids chatted to us in Spanish the whole way there. The fact NONE of them even slightly complained about the walked really impressed me.

Bea: I must say that it’s hard to choose as there have been so many special moments during this time in Nicaragua. Definitely, the winner for me, is the laughter and happiness that we see from the kids when we do our show! It’s just so great and I hoop we inspired them and taught them real tricks for life. What makes it more special here, is that these kids don’t really get to see circus shows much as they come from difficult backgrounds and I would like to think that we have made a little space in their hearts. We have come across to some really talented kids and it has been really hard to say goodbye to all of them.

Graham: We’ve performed in some great and strange locations during this trip, including in the middle of dirt roads, but one of my favorite places was the school playground made entirely of dust. With every step or jump a dust cloud blew up, which stuck to our sweat, so by the end we were all totally filthy. In most of the shows at schools the audience gave fantastic reactions to us, normally roaring/squealing with laughter, often rushing onto the stage with us as soon as we finished, and once we even spent about half an hour afterwards signing autographs. Many of my favorite experiences of the tour weren’t to do with the teaching or performing though, such as sitting on the beach at night wearing shorts and a vest in January, while Paddy gave us a little concert on his ukulele.

Emer: Los Quinchos for me was the most touching project, but my favorite moment, that was their final show. It really made me so proud of them, especially the little boys juggling routine. Getting 8 – 10 year old boys to focus on choreography is difficult but they were amazingly enthusiastic and worked well together in practice and on stage, it was beautiful. The whole day was amazing though, the team worked so hard all week and we were exhausted, but after final practice sessions costumed up and painted faces. There are so many talented kids at Los Quinchos and they really love circus. It was the whole months work and effort in one spectacular presentation The goodbyes left us all tearful, I miss those kiddies but am pleased to have an influence on them. Mission accomplished.

Me (Josh): The first day in Leon was one I loved. We had just finished a productive week at bootcamp and were all a bit sad to be saying goodbye to the beach. Fortunately, we arrived to an amazing house, set in a quiet, shady courtyard with a really nice family feel. After a quick lunch at the house we were had our first experience of the camionetas, which was extremely exciting. We then performed our show and walked back home through the enter of Leon in full costume. Overall it was a day full of new things: it was one one the first times we performed our show, we got to discover the gorgeous city of Leon, see where we would be staying for the next month and ride the camionetas for the first time. Overall it set the tone for an exciting month in Leon, my favorite place in Nicaragua.

Thanks Nicaragua, it’s been great.