We made it to the mountain ciTea of Darjeeling! 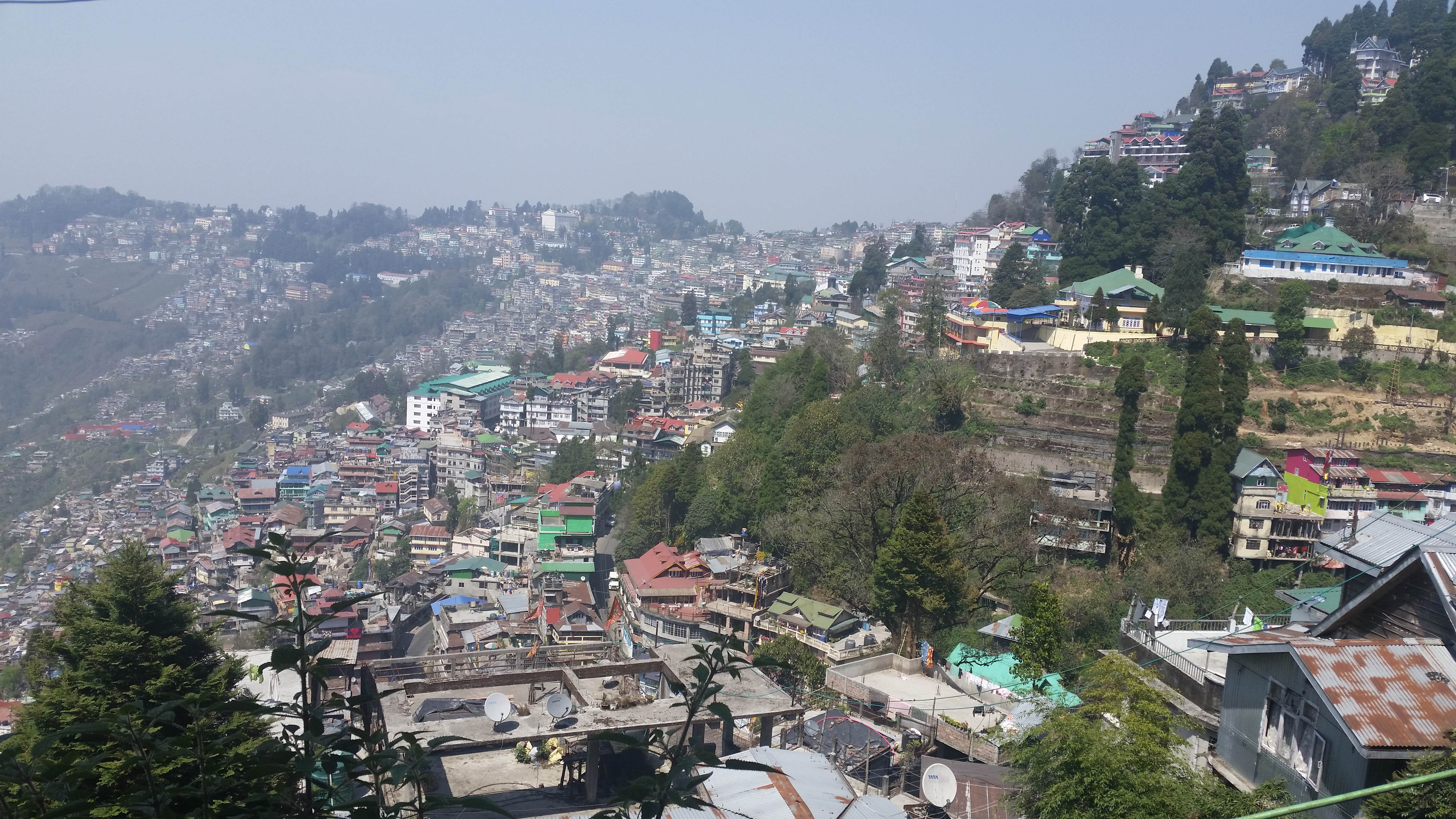 After saying goodbye to modern Kolkata, the team boards a train heading towards lush and mysterious Darjeeling.  Our train deposits us in Siliguri, where we smuuuush nine clowns plus a full circus’ worth of equipment into one jeep.  And up and up and up the mountainside we go — towards Darjeeling, a trip that takes about four hours.  Four hours pass by quickly, despite our being squished and squashed, because one cannot stop oneself from marvelling, mouth agape, at the magnificent views!!! Darjeeling sits, wild and green, just beside Khangchendzonga, the tallest peak in India and the third highest peak in the world.  Gazing up at Khangchendzonga sends the message home; we have arrived in The Himalayas! Glorious!

This isn’t anything like the other places we have visited.  Gone are the endlessly noisy and dusty roads filled with cows, people, bikes, and cars.  Instead the roads are neatly paved and different types of trees line the roadside.  The roads explore the landscape in sleek ribbons that even give my San Franciscan upbringing cause to wonder.  Darjeeling was named after the famous Dorje Ling monastery sacred to both Buddhist and Hindus.  The local streets loop back on themselves to snake through steep land and everyone walks everywhere in spite of the extreme slopes. For the first time in 4 months, I feel …….cold? The feeling is almost unfamiliar at this point, but the group welcomes it like an old friend and we all bundle into our socks, hats and jackets, most of which are being aired out for the first time since our arrival in January. The dogs here have longer thicker fur than any I’ve seen in india so far and it must be to battle the cold, and everyone wears colourful sweaters and thick scarves.   The Tibetan influence can be seen here in the architecture, the temples, the food, and the thousands (not an exaggeration) of Tibetan prayer flags that hang everywhere.  Even more impressive is the way the flags survive the storms! Within the first couple of days we are welcomed to Darjeeling by one of the many famous thunderstorms.  Thunderstorms here take themselves very serious and include (for free);  the electricity in our home coming in and out (mostly out), the water in our tap following suit, the rain drumming on our thin tin roof , the powerful wind blowing our front door open, the deafening thunder (louder Johny’s nighttime sneezes ) and the lightening! Oh, the most wonderful performance of lightening, with the fingers of light reaching every which way, up and down and most amazingly, sideways, lighting up the entire sky and gifting a half second glimmer of the mountain ranges across the valley.  These storms are to become regular and beloved pastimes to us during our stay here.

Another amazing thing to share is that we will be having a student called Rinki, whom we worked with during our month in Varanasi, come to teach with us for the last three weeks in Darjeeling.  She is an exemplary student, a leader in her community, and a great fan spinner.  She has shown herself to be responsible and trustworthy, and she will be the first female student to become a junior volunteer for PWB, setting the precedent for many students to come.  We are so excited to collaborate with her, as this deepens the work we can do here with PWB, and is a huge opportunity for her to grow and experience teaching and performing with PWB.  We are honoured to be joined by such a thoughtful and kind student, and I know we will be able to make magic happen with Rinki as a new addition to the team.  I will be going to Varanasi to travel with her here on the train, and we will all resume ( as a team of ten!) teaching and performing together until the end of our tour.

As we settled into our new accommodations (2 houses, 5 people each house) we began to prepare for our first week of teaching.  We will be working with two main organisations; Edith Wilkins School for Street Children, and the Salvation Army School for the Deaf and Dumb. We also will work a bit with an organisation called Hayden Hall.  We will work with some of these children at least 5 days a week— this is a real opportunity to relay an array of skills and form deep connections.  This leg of our journey will emulate our time in Varanasi because we have more time to spend with the same group of kids over the course of one month.  This allows for a real relationship to be made between teachers and students.  At the end of the month we will be helping the kids at both organisations put together a show for their community.   The kids here have a true sense of mindfulness, their prop closets are kept in pristine condition and they seem to have a true reverence for the work.  We spent the first week evaluating skills and seeing what the kids had in mind for what they wanted to learn during our time here.  So many enthusiastic students!  Many of them have already established skills in juggling, hoops, spinning plates, and poi.  We hope to introduce fans, rope dart and staff to them as well.  So we have a lot of work to do! I am really looking forward to empowering the children to perform and share their passions with the community here and I cannot wait to see the beautiful art we will make together.

Looking forward with a cup of Darjeeling tea in hand,