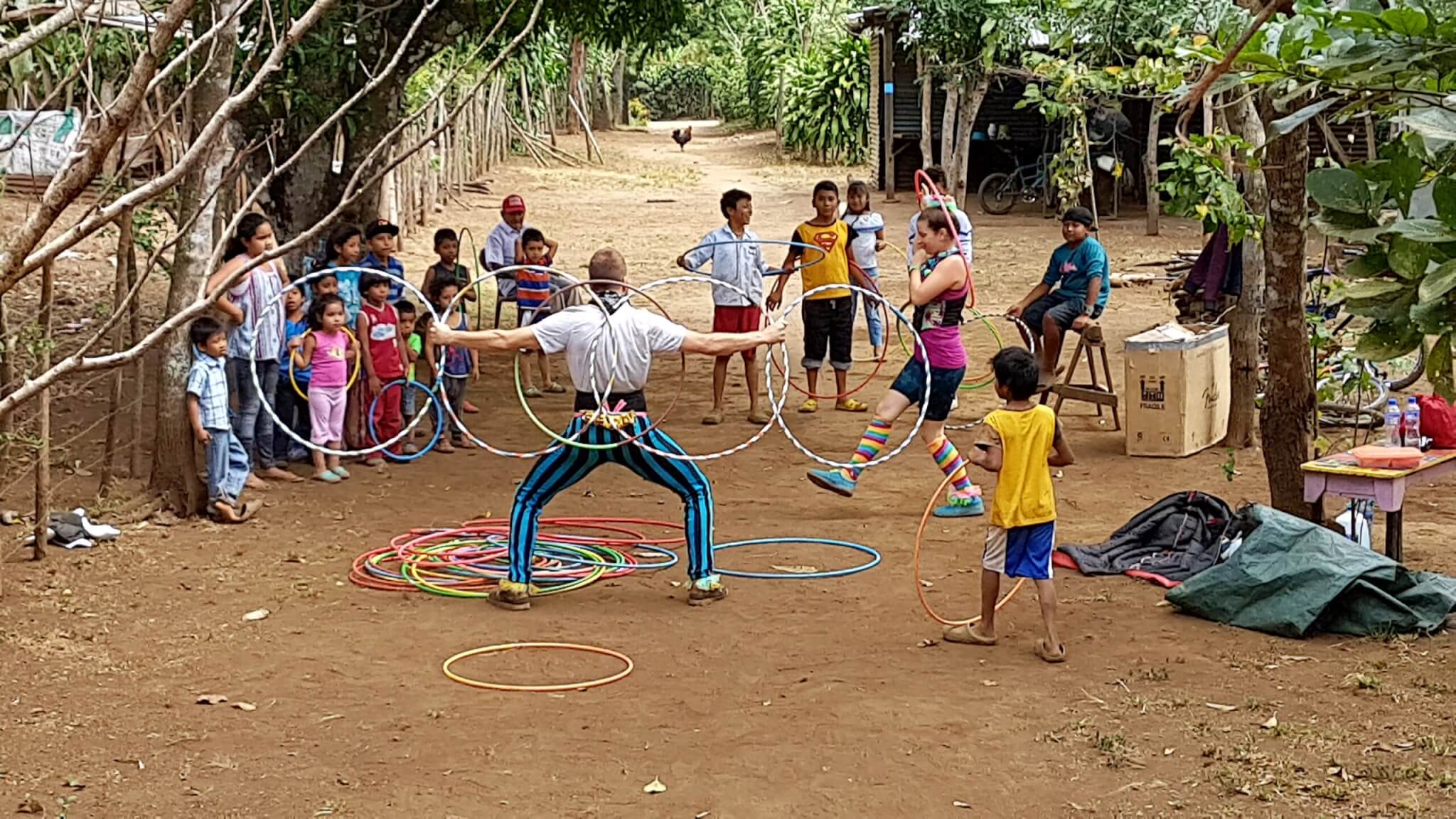 Tour Memories – Looking back with past Voulenteers

My name is Will, I am 30 years old, currently living in Belgium. I was 27 when I went on tour with PWB in Nicaragua, and I had been working as a self-employed circus performer and teacher in Scotland about 3 years prior to going on tour. My main discipline is juggling, and have done some training in acrobatics, handstands, and clowning. I got into juggling whilst at the University of Edinburgh, where I also developed my passion for performing and was part of a fire performance troupe called PYROCELTICA.

Which memory have you revisited the most?

Arriving in Managua on the 2nd of January (after New Year’s Eve) was quite a shock, and the blistering heat of Central America definitely caught me off guard straight off the plane. Our first week as a group in a beach hut on Las Penitas beach was sublime, getting to know each other, devising a show, trying on costumes, and learning a bit about each other was truly unforgettable! At the end of our stay in San Marcos we hosted an afternoon of circus games and challenges with the boys and girls of ‘Los Quinchos’ and ‘Las Yahoskas’ which was absolutely delightful, everyone was so full of joy. We then went and got all dressed up for their performance in the town center, and drove into town loaded into the back of a wagon and a small tuk-tuk; it was really like a clown scene out of a film!! 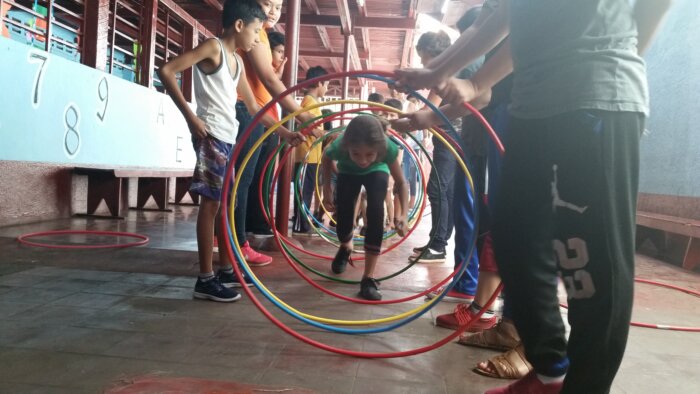 Some of the kids and the families we were working with had lived through terrible traumas, and this was definitely hard to cater for. We did shows in ‘barrios’ next to landfill sites, but the truth was that everyone who participated in our shows or workshops had an uplifting experience and was able to enjoy the joy of circus.

I think my biggest achievement was probably making it through the whole 3-month tour without losing my temper at any point! There were definitely some stressful moments, but for the most part, I was able to stay calm and approach problems with a level head and find solutions. Understandably spending 3 months living, working, eating, and sleeping with the same 6 people can become an interesting obstacle in maintaining healthy relationships, when there really isn’t much space for personal space, what with all the planning, weekly meetings, workshops, outreach and so on! It was definitely a challenge, but I think we did a fantastic job and it was hugely rewarding! 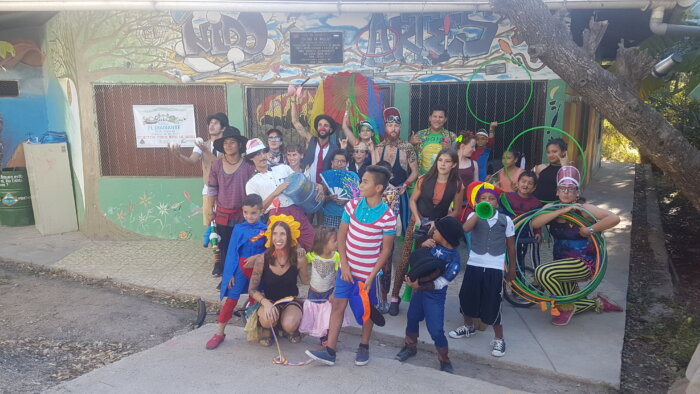 Our show was about colour and self-expression. We had quite a classic layout for the show; we used everyone’s’ natural skills and the objects or disciplines that each of us was familiar with, and created little duo and trio acts. There was diabolo, hooping, Juggling, some group acrobatics (not the strongest section of the show 😉 ), dragon staff, and a couple of clown sketches. We focused on teamwork and created an atmosphere to allow everyone to express themselves. 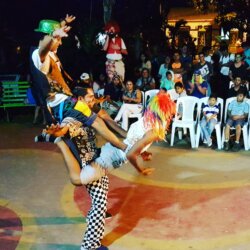 There were some really challenging moments working with large groups of unruly kids who didn’t particularly want to engage with some of the activities we were proposing, so some of my biggest breakthroughs came from being flexible and accommodating to the specific needs of the group. Particularly channeling energy that sometimes manifested into aggression or violence and directing it towards creative and collaborative physical challenges! 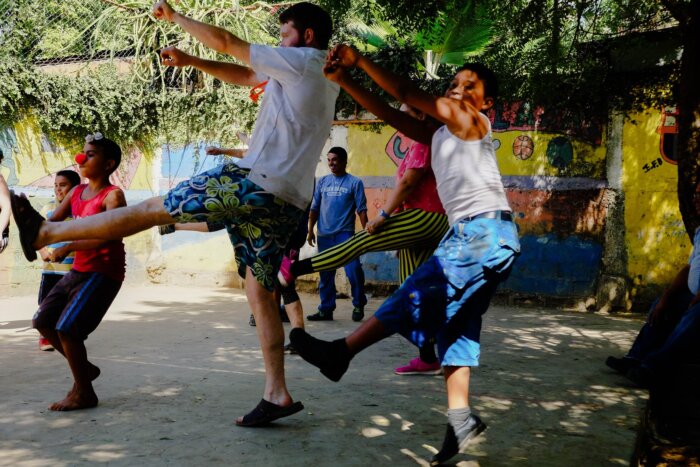 How did you fundraise the tour?

To fundraise I did a few things; I saved a percentage of my fees from performance and teaching work that I had done during the fundraising period; I organized donation-based, family circus workshops in public spaces; I made a donations page, and to spread the word and I encouraged people to donate, I did several publicity stunts! I unicycled 20 miles from Bristol to Bath, I did a Christmas inspired 5km ‘JOGGLE’ (juggling while jogging) dressed as Santa’s No.1 Elf, I attempted a world record for the longest time spinning a pillow on my finger (unsuccessfully) and in the end, I successfully raised all the money that I needed for the tour. 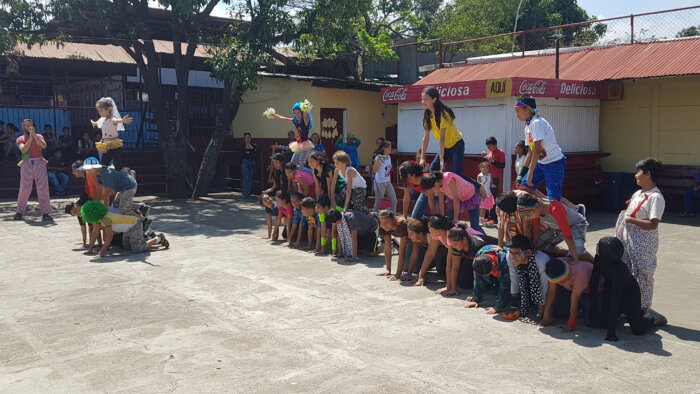