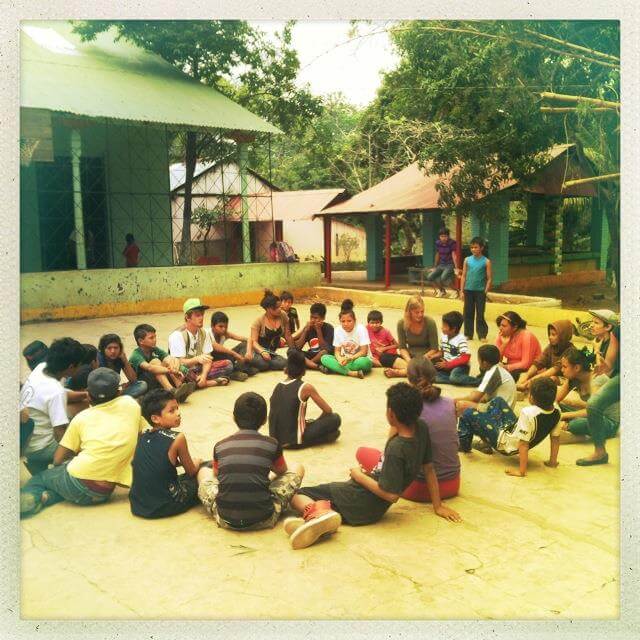 My name is Karen, I’m from Australia and I was on the 2015 Nicaragua tour with PWB. I have been teaching social circus and circus since 2004. I also perform – juggling, hula hoops, acro, trapeze (once upon a time), clown etc. I currently live in Mexico and have been working on a social circus project here called Circologia (https://www.facebook.com/circologia/), and teaching circus online since the quarantine! 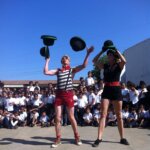 There are many! I think one of my favourite moments was doing a show on a dirt road and a horse ran through the performance. Someone was on the horse, we were basically on a street in the middle of a barrio that had horses.

I also remember fondly our tour leader (Oihana) leaving us individual notes about who we are/were as people and it was like a fun Christmas surprise and also really sweet!

Lots of dance parties!! With the kids, on a bus, in a van, at the market, in a class, on stage, it didn’t really matter where, we were always up for a boogie!

The hardest thing for me personally was that nothing ever happened on time, or with the scheduling we expected. Luckily I wasn’t really in charge of that, so I could try to not let it bother me and go with the flow, but it was definitely difficult. Also, the different maturity levels of some of the people in the group was a challenge at times. 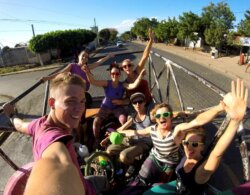 Learning to video edit on the world’s slowest computer! I really enjoyed learning to edit with what we had and making a great story to share with the supporters and fans! Also doing a handstand on/at pretty much every cool building/location we got to.

Our show was a pretty traditional circus act show. However, I think the level of skill was really great and that made a big impression on the kids. I also based 2 boys for the ‘acro/comedy slapstick’ routine and I think that was really great for audiences to see the role reversal in a fairly male-dominated culture. We had a variety of skills and experience in the group, so we found it best to make a circus show that was really fun and inspire kids with our skills. We also had a killer soundtrack! 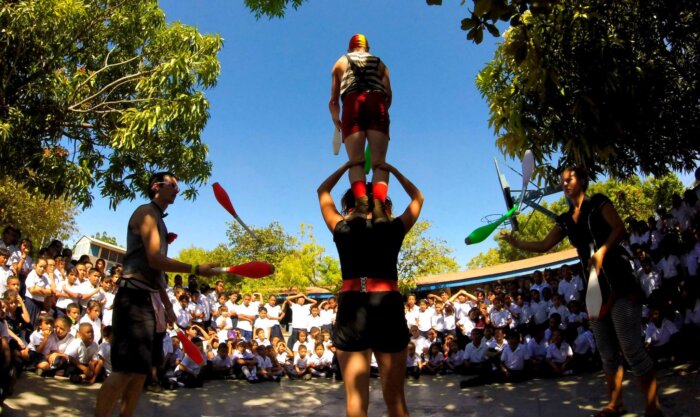 Teaching the other people on tour how to teach, I felt really happy that I could share a lot of my skills in how to teach with the others in the group. Everyone had their own experience, but I feel for me, that was the most rewarding, that I could share my experience teaching social circus with performers or people who were keen to learn to teach but hadn’t done much before. 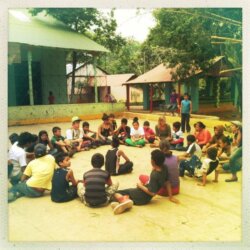 I ran a ‘GoFundMe’ type of thing with rewards. I forget the name of the platform (it’s Australian). I also ran classes by donation before I left with the funds going to tour costs. I also worked a lot of jobs and had enough money to go even if I didn’t reach the full target with fundraising. Fundraising is hard, but you’d be surprised how many people are willing to donate a little. I also was really fortunate to have some juggling equipment donated from friends and a juggling shop that I took on tour and donated. Thank you Juggleart! (http://www.juggleart.com/catalog/index.php) 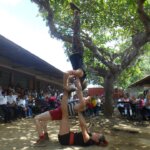