I am David Ford. You might see me as ‘The Fire Man Dave’ or ‘The Great Mandavi’, usually doing a mix of fire shows, stilt walking, unicycling, circus skills workshops and walkabout entertainment. I’m also sometimes known as ‘Joy’ – in Granny Turismo – the world’s first and only shopping trolley dance display team. 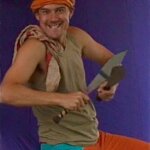 Wow! There were so many moments in the months I was out there. Compèring the kids show at the day center for street kids in Vijayawada and trying to keep some sense of order and flow with three kids climbing on my back at the same time. Jumping into the river to cool off with the kids after the workshops had finished at another center in Vijayawada. Staying at the hospital run by nuns and Sister Fatima calling Ollie ‘Olive’ every time she saw him, hitting him playfully and then totally denying it when he interviewed her. Seeing a kid (whose arms ended just beyond their elbows) throwing juggling clubs with skill and precision and with a huge grin on their face. One of the nun’s hula hooping! Seeing the skills of the kids that had already done workshops with PWB in previous years and being really impressed. In Darjeeling, getting soda water – the bubbles rise so fast because of the altitude that they jump right up and high out of the water! It’s like having your own little personal water feature. Kids at a train station chasing Olly along the platform as he rode his unicycle. A many-layered human pyramid of laughing girls. Going to the doctors in Darjeeling for a stool test and medical advice and seeing the beautiful handwritten sign in the waiting room that said ‘We pray for your wellbeing and recovery’. Seeing the sunrise over the Ganges in Varanasi from a boat on an early morning group adventure. 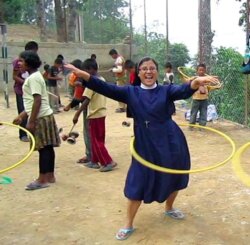 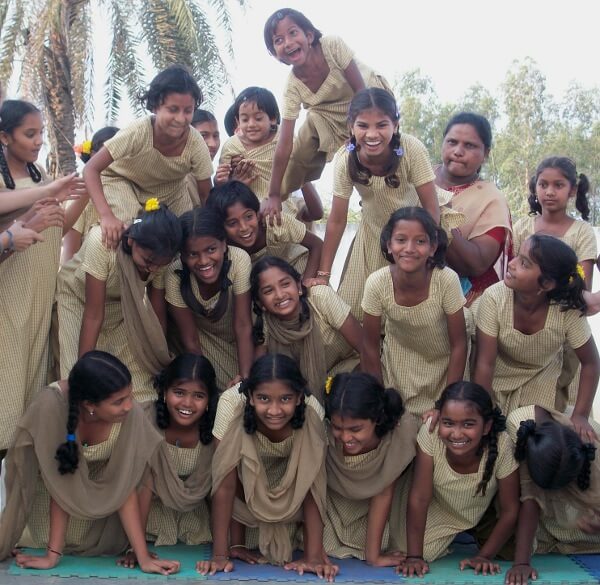 On a personal level, we each set ourselves challenges and I set out to ‘qualify’ five clubs. So starting with three clubs in one hand and two in the other, I needed to throw ten consecutive throws and not drop once – in the juggling world, this counts as ‘qualifying’ five Clubs. Many, many, many hours of throwing, catching, dropping and picking up clubs – on beaches, in parks, on rooftops …. And finally, I did it – it might not have looked great, but I did it! Not easy. Big achievement. Very satisfying! More satisfying still – after careful encouragement and lots of no pressure, right at the end of the tour, seeing Eluned move through her fear and run into the fire skipping rope. Most satisfying of all though, was watching all that had been put together for the shows that the kids did – in the cramped room in Vijayawada, on the stage next to the Ganges in Varanasi and in front of a school building in the hills of Darjeeling. Seeing the kids showing their dance moves, their circus skills, their laughter, their enjoyment, and sharing in their excitement.

It was a show of two halves designed to start a little before sundown so by half-way through it would be getting dark and ideal to make the fire show look as good as possible. The first half involved Olly as an extremely strict policeman who rode a ‘bicycle’ with no frame and no front wheel! The ‘kids’ (the rest of us) would play and try and avoid getting caught until the policeman would scare us off – he would then look at the props left behind and pick them up to have a little play … and then think better of it. ”Here is only serious. No play!” We had a rickshaw journey and the rickshaw was made up of people – I was the seat!! There was a restaurant scene where two of us were diners with a waiter and a crazy chef. Andy was the waiter, he hit his head with a diablo and was flat out on the floor. I was the crazy chef and ended up juggling three knives while walking over him. Matt and I were like a pair of almost-identical twins and did a juggling routine building up to passing seven clubs between us. By the end of the show, the policeman had got in touch with his fluid playful side and was enjoying playing just as much as we had as kids at the start – much to the delight of all the kids watching. The fire show involved fire hula hoops, big balls of fire on chains, fire staff, fire poi, fire juggling torches and a fire skipping rope long enough for all of us to jump in it at the same time!

One highlight was using cards with emotional faces on for a clown workshop in Varanasi: I got the kids to tell me the words for the feelings in Hindi too. Faces all around me with red clown-noses on that I had collected at a big corporate party the Christmas before, looking in turn, angry, sad, scared, crazy, and happy. Other than that, I learned to step back a bit and watch more to see how people were getting on – often they were doing just fine as they were without needing me interrupting their focus and concentration!

Before I went on the tour, I was working at the time as a performer anyway: the early months of the year are usually quiet and I used some of my earnings to cover my costs. As it turned out, I didn’t miss out on much work and my money went a lot further in India than it would have done back in the UK!