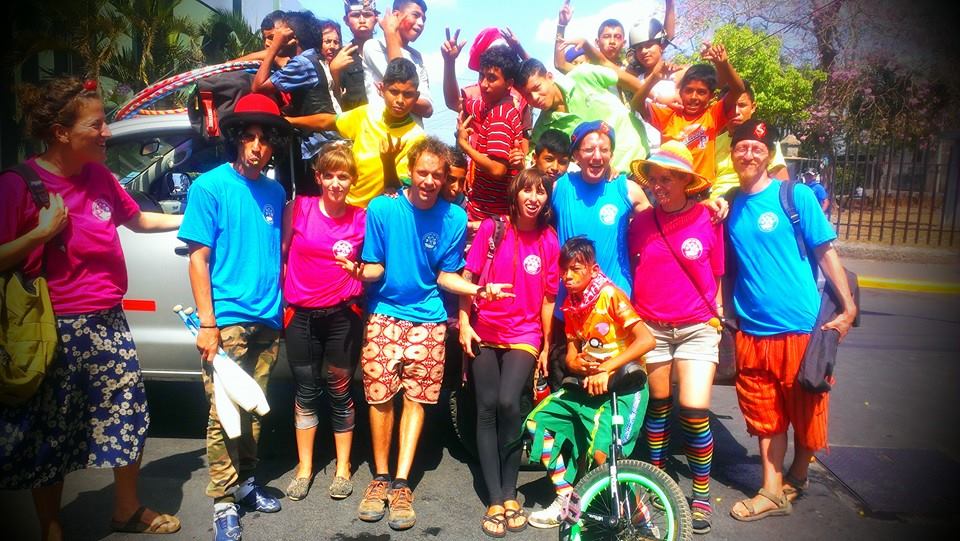 “Somos Quinchos!” – A moment after the children’s final show

Peering over the gleaming, swirling pot of our experience, I reach around to find a long wooden spoon. I stick it in the pot and stir slowly once and then twice. Carefully, so that the colors rise up but not so fast that it blurs the picture. I want to see.

I bring the spoon closer to my face. It smells like the end. Our heads are full of plans, plane tickets, and decisions not yet made. What happens next? We’ve only got things figured out up until September. I guess that’s the kind of team we are. Not a lot of five-year-plans floating around in this crew/stew.

Bits of conversation flicker in the spoon: Jacob has a space show one day after he lands, Juni has to pack up a huge truck and go to a festival, Aileen is staying with Cesar for another month or two, Rachel and Andy are off to Corn Island, Alex back with the wife. And me? Flying into the arms of some presumed lover in Boulder. There is a lot going on in Internet Alley and I can see thousands of Wi-fi waves swirl within the soup.

The last week of San Marcos brings with it a growing affection towards the kids that bubbles up softly in our chests, expands our hearts and extends our arms for another hug. Their stunning faces, soft and brown. “Beautiful golden shining human beings” as Jacob said and I agreed immediately.

This week we were invited for dinner at Zelinda’s house, the woman whose motto is “Nunca mas un niño en la calle” (Never more a child in the street). She left her home in Italy to build an organization in Nicaragua and is now a mother to so many of these children. She welcomes us into her home with a four-course meal and sits down to tell her story. She tells it slowly, in Spanish, with a heavy Italian accent, with well timed hand gestures and dramatic pauses of sadness or giggles. She is obviously a performer too.

Her tales reach far into the past when her grandparents were circus artists as well. She is keen on theatre and circus so when PWB came around four years ago she was thrilled to bring a part of who she is, an artist, a gypsy, and a descendent of circus artists, to her children here.

Through her stories I get to taste a bit more of what Los Quinchos tries to provide for the children: a home, the very basics, a bed, a roof, love. Sort of like the ‘bread and butter’ but on second thoughts butter seems like a privilege in this context.

While she describes some of the hurdles and the bureaucracy she has to face in order to run the organization, all I can think about are the children’s faces. Jeffery, Joel, Christian, Juan Pablo, they are all such a vivid part of our lives right now.

After knowing these kids for a month it’s now unfathomable to imagine them ever being neglected or mistreated. We don’t know their stories, and my heart shrinks with fear of the facts and details of their past. Beautiful, golden, shining human beings.

How are we going to say goodbye?

I reach into the pot to stir again, this time coming up with their efforts. They have been coming up to meet us everyday at the cultural center, about a 25-minute walk from where they live. Every day they participate, play, get upset, and soak up our attention, while we marvel at their genuine sweetness and strength. After a month here we feel as if we’ve barely scratched the surface, but the final shows are pressing on.

Their dance moves embarrass us. Curving and sliding their bodies exactly like in pop music videos. They are so good. Their 15-year-old flirty energy comes at us, pushing boundaries. Mix that together with their real need for connection and a dose of dazzling glorification of us and what do you get? “A minefield” Jacob concluded.

We remember being teenagers and looking at the young adults around us this way. As far as we were concerned, people in their 20’s or 30’s had it figured out. They were so talented and independent! We were completely enamored.

But for now we have a show to do! Practice time passes and it’s hard to count on the kids to show up. They’ve got a lot going on between schoolwork, other workshops, and flirting with each other. It’s hard for them to focus. Sometimes kids that we know can do a lot of tricks will suddenly throw their hands up in the air and with an insulted face say, “Tengo pena, no, no quiero!”. We push them gently “come on, come on, you can do it!”. They are delicate, they are teenagers and they flip on us as we try to corral them with our broken Spanish “tu puedes…tu puedes…”

Somehow in this last week I see more tears. Maybe the kids just feel more comfortable with us after four weeks together, maybe it’s the pressure before the show, or maybe it’s the end that’s rushing towards us in that all-encompassing yet strangely imperceptible kind of way. Their faces change suddenly to reveal complete sadness. They get insulted or turned off. They laugh wildly with no apparent reason. Who are they? We only touch the surface.

The heat rises in the pot as we approach the day of the performance. In the last two days we stumbled through the show. The first run: chaotic, unfinished, unfocused yet somehow there. As Aileen said, channeling her primary school theatre teacher “a disaster!” The second run was much better, the kids were loving it and it ended with a full group bow that turned into a group hug that resulted in lots of joyful screaming and laughing which in turn transformed swiftly into a short dance party. Yhaaaa! We are ready for the show! I lay the spoon aside, take a breath and dunk my head right into the pot, into the weekend, our last weekend with them, the weekend of their shows.

OMG we are melting! The last three days were spent performing in the blazing sun. Midday in their school, in San Marcos’ town square, and in Jinotepe’s town center. Their lovely painted faces and sparkly somewhat ragged costumes just pop out on the background of the peeling bandstands. Rushes of excitement are shooting up my chest and fill my eyes with water and my throat with shouts of encouragement. They are doing it!

Some kids just take over the stage courageously, working the audience and surprising us with their confidence. With some, the embarrassment kicks in and they do half of what they intended. But hey, we’ve got three shows and there is time to improve! There are technical difficulties with driving the kids to the performance sites and sometimes with the sound system. There is emotional stuff that comes up as some of the kids’ parents turn up to see the show. They are hot, sometimes hungry, always nervous and… They do it! 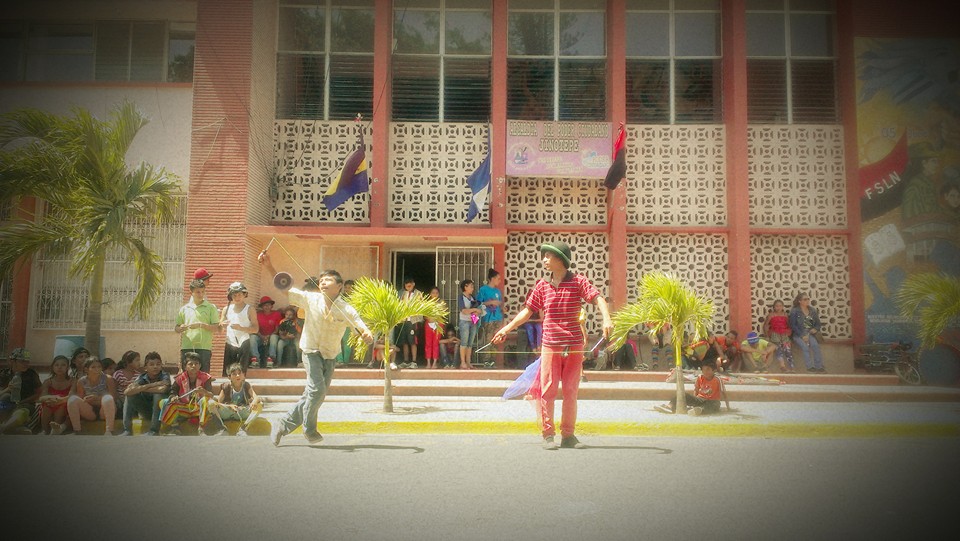 There were so many moments of victory, so much embarrassment and fear that they experienced through this weekend.  A big heap of energy extended out while the sadness of goodbye trickles into words and looks and questions “Will you come back?”

The moment arrives to gift them the circus kit and say our goodbyes, we are all exhausted, but we need this last moment together.  I slowly lift my head out from the San Marcos pot. Last colors drip down from my face and back into the pot mixing in with goodbye tears. 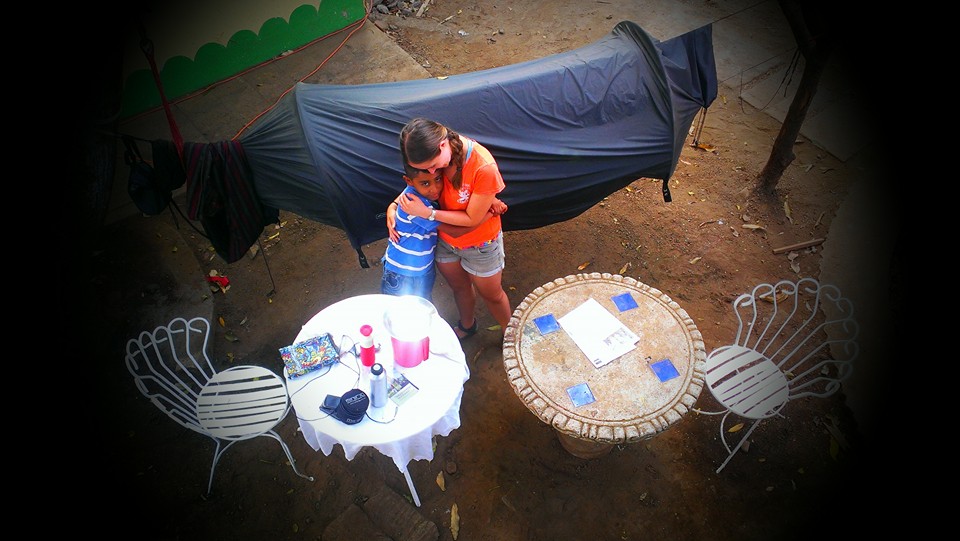