We have had a great week in Granada, once again staying at La Escuela de Comedia y Mimo and doing workshops with local children in the morning and collaborating with La Escuela’s artists for shows in the afternoons.  And, in between, preparing ourselves for the Big Wide World that lies beyond PWB Nica ‘16!

Each morning, Rafa and Lester (of La Escuela) go to local barrios and bring back around 18 children for workshops with the PWB team and anyone else at the school who wants to join in and help out.  The usual fun and games ensue.  Silly and serious warm-ups, excitable games tinged with meaningful objectives to do with coordination, team work, getting to know each other, sharing, support, language …  The list goes on.  And, of course, we spend a healthy chunk of time playing with the different props.  Three months in and we are still discovering new ways of learning and engaging.  The project might be finishing but there is no end to the magic of sharing and playing.

The time in Granada, over the 4 years that PWB has been coming here, has proven to be a productive space for working with other artists, as a way of contributing to this creative community in Nicaragua, and also of offering the PWB volunteers a chance to play, create, and share with other adult artists.  The people we get to hang out with here, at the moment, include La Escuela crew of Nicaraguan artists, a Swiss born but world travelled clown from Clowns Without Borders, and a trio of Canadian volunteers from Quebec based NGO, L’amie. 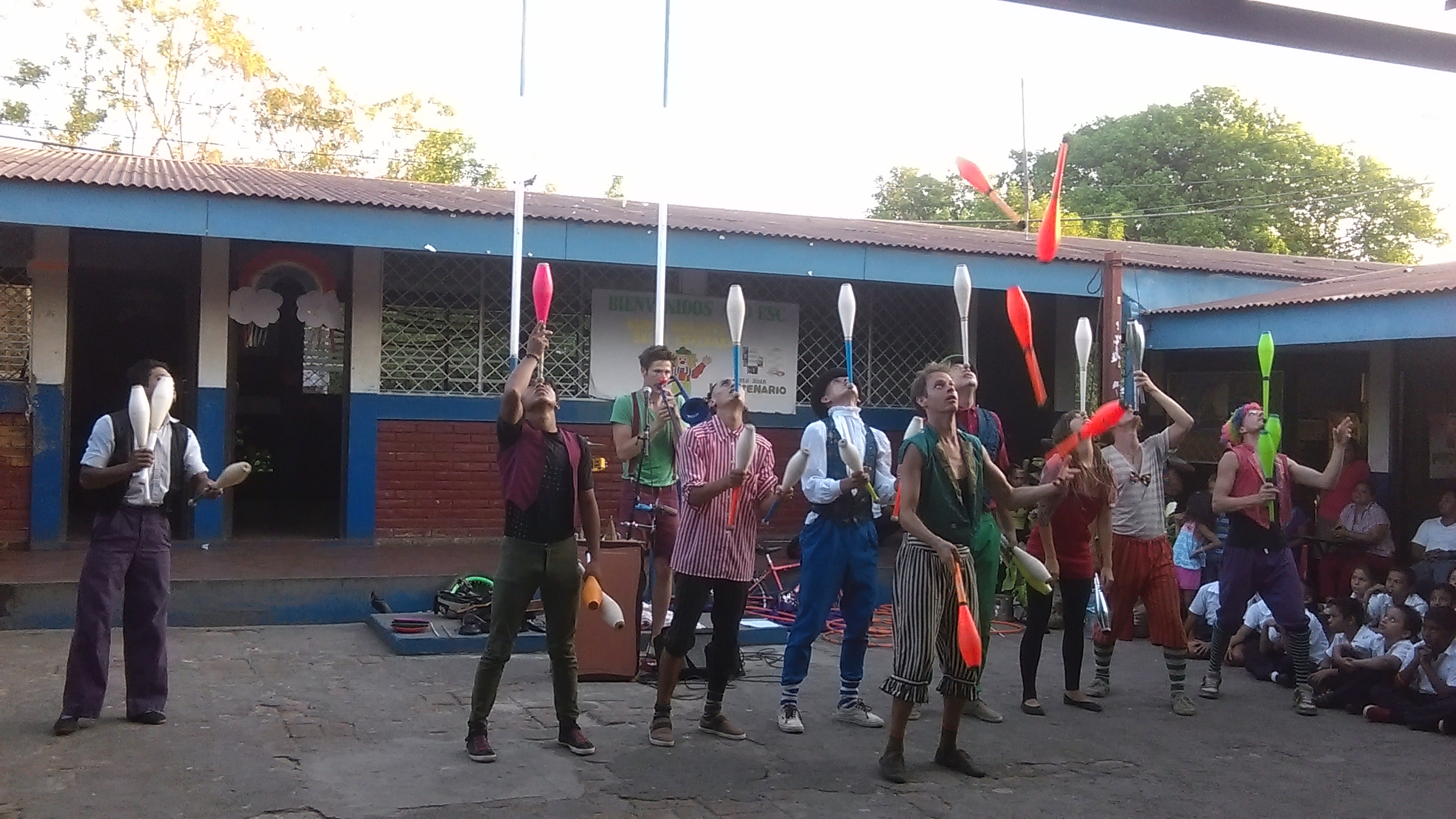 The Nicaraguan lot specialize in prop-based circus as well as acrobatics and theatre. Working with them has included the creation of huge group acro and juggling pieces – mega fun!  Our new Clowns Without Borders friend, Jan, is a physical comedy king and master of loop pedal madness.  Presenting shows with Jan and his suitcase full of noise, attentive to every move, has been a pleasure for all involved.  The Canadians on board are on a 6 month project at the school and each bring different skills, including set design, project management, and communications.  However, last night they were painting our faces like skeletons for a show, after spending days making costumes!

Working with other international volunteers has been a great experience.  It’s really nice to see other people ‘like us’ who are giving time to creative development in this way.  It’s also kind of relieving to share what can sometimes be frustrations but also thoughts on, and techniques for, dealing with the often very different way of ‘doing things’ here in Nicaragua, in comparison to, for example, Canada, Switzerland, or the UK.  And I’m not referring to how, in Nicaragua, they seem to keep vehicles going forever, or pick up snakes or poisonous frogs in their bare hands, or manoeuvre boats through rapids, or buses/trucks through gaps seemingly smaller than the vehicle, or even self-build houses out of plastic bottles!  Or, on top of all of that and more, remain happy, positive, and relaxed, often in the face of adversity.  Nope, not talking about any of that.  Only, simply, the almost complete lack of compatibility with our expectations of organisation, rehearsals, and general show/workshop prep.  Finding a balance between accepting these as unchangeable differences in the way things are done, and actively trying to be the voice of motivation/productivity, has been an ongoing lesson on this tour (and the others I have done) and a challenge that everyone rose to and handled with understanding and sensitivity from both sides. 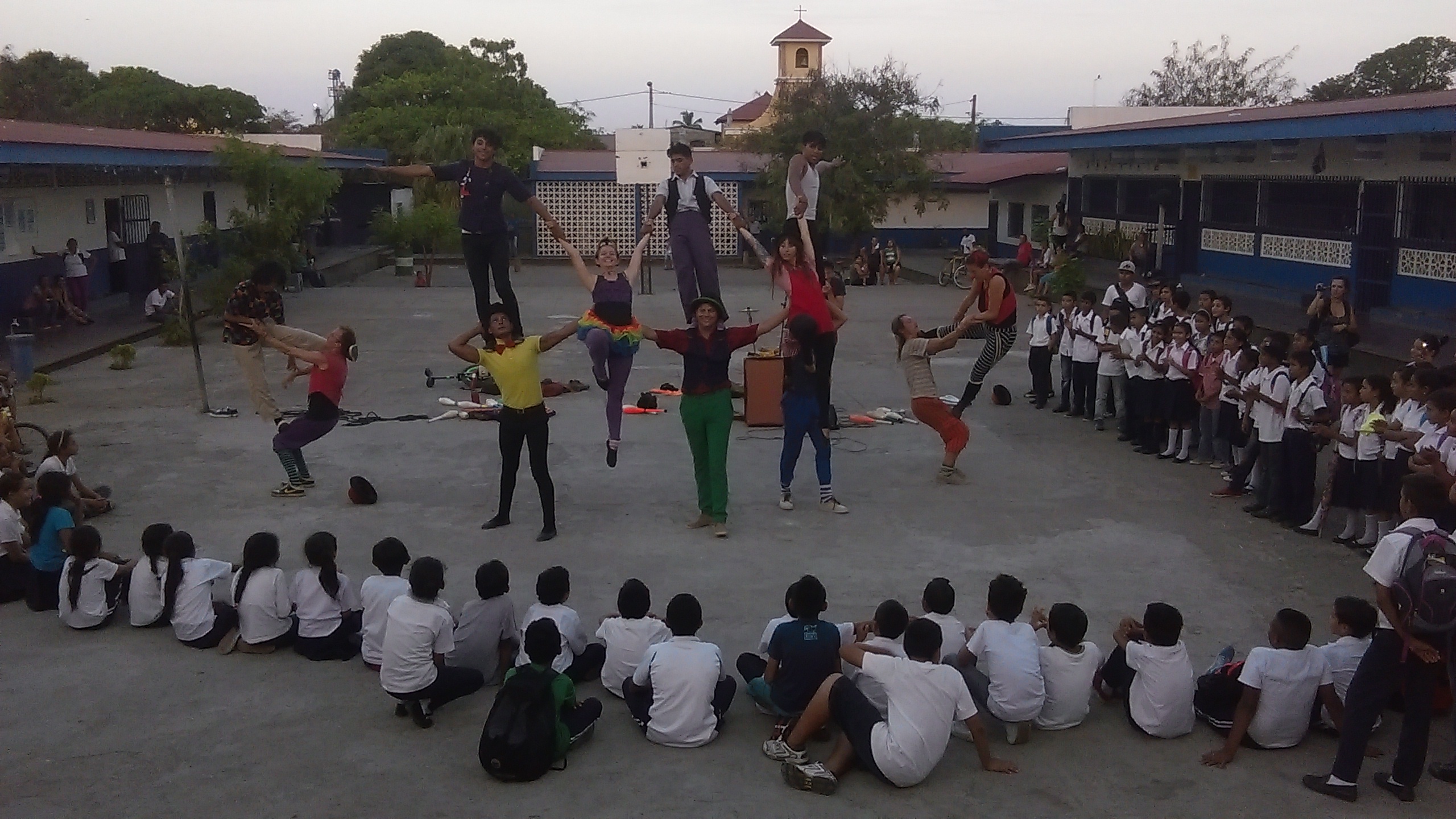 The show that we ‘assembled’ with our Nicaraguan and Swiss friends, to perform in schools, was a collage of our acts, their acts, and quickly created collaborations.  With 14 performers all having their moment, and sharing many, the show was easily 45 minutes or longer, and with children sitting in the sun and dirt, we sometimes had to cut sections out to reach the end!  It was a lovely end to the performance side of the project, to be back in schools in our last week and sharing the stage with friends we have made over the last 3 months.

Other performance opportunities we had during the week included an evening of entertainment in a restaurant with the guys from La Escuela, and some fire shows on Granada’s busy Calzada.  These were considered outside of the project and optional for the team, being evening affairs for tourists, but nonetheless were a good experience for those involved to play more with our friends before saying goodbye.

As always, far more happens in a week than this virtual page has room for but as I always try to include as much as possible, I’ll quickly write about a couple of things I’ve chosen not to write about:

Rescuing kittens from the street should probably be left to Vets Without Borders but it’s hard to walk by without doing anything, so naturally we took them ‘home’ and La Escuela have kindly offered to look after them.  Also, I’m not sure who you call when a wild bee nest needs dealing with, but here, when they are dangerous African Killer Bees, you apparently call the fire brigade who will put on their suits, deploy ladders and hoses, and remove said bees in a way I didn’t stick around to see! 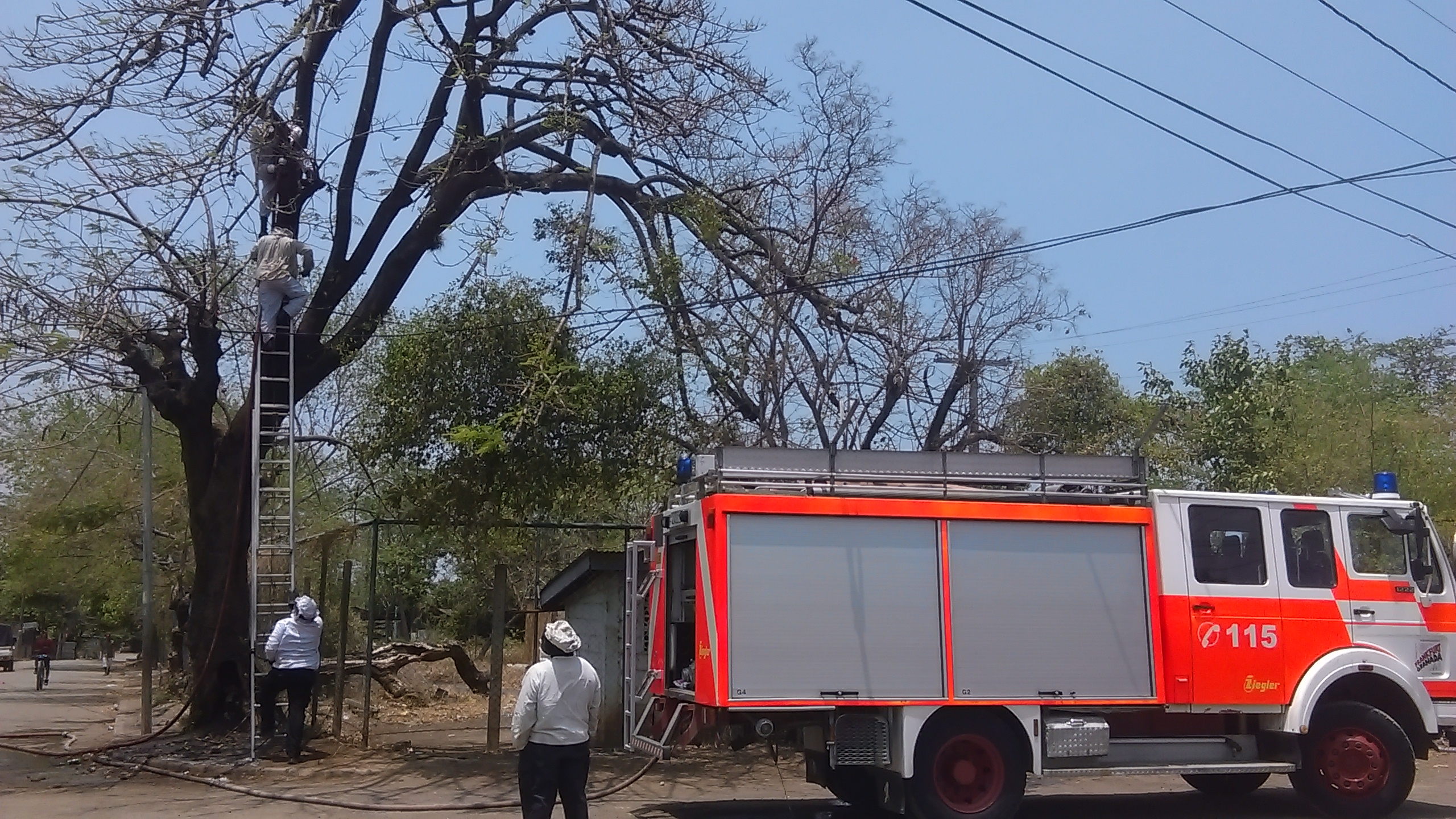 If you get stung, you go to hospital.

Another element to our last week that I will not write at length about but feels impossible not to include in this blog, was the absence of our friend and tour coordinator, Aileen, who, after quietly and bravely coping, for the duration of the project, with the ‘any-day-now’ possibility of her father’s passing, travelled back to the US for his funeral and to spend time with her family.  She returned to say goodbye and finish her role as tour coordinator.  Well done, Aileen, you with your courage, commitment, and calm, are at least partly responsible for another beautiful and successful PWB Nicaragua tour.  Thank you.

Our final Saturday together involved a group adventure to La Laguna de Apoyo, near Granada, where PWB teams have fallen in love, found themselves, lost themselves, and got ridiculously sunburnt since PWB Nica began.  We passed the day doing water-acro, beach games, and getting thoroughly and joyfully exhausted together for the last time. On Sunday the time came for goodbyes.  We shared our appreciation for each other, we did inappropriate touching, we cried a little, we told each other ‘I love you’ and we said Hasta La Proxima. 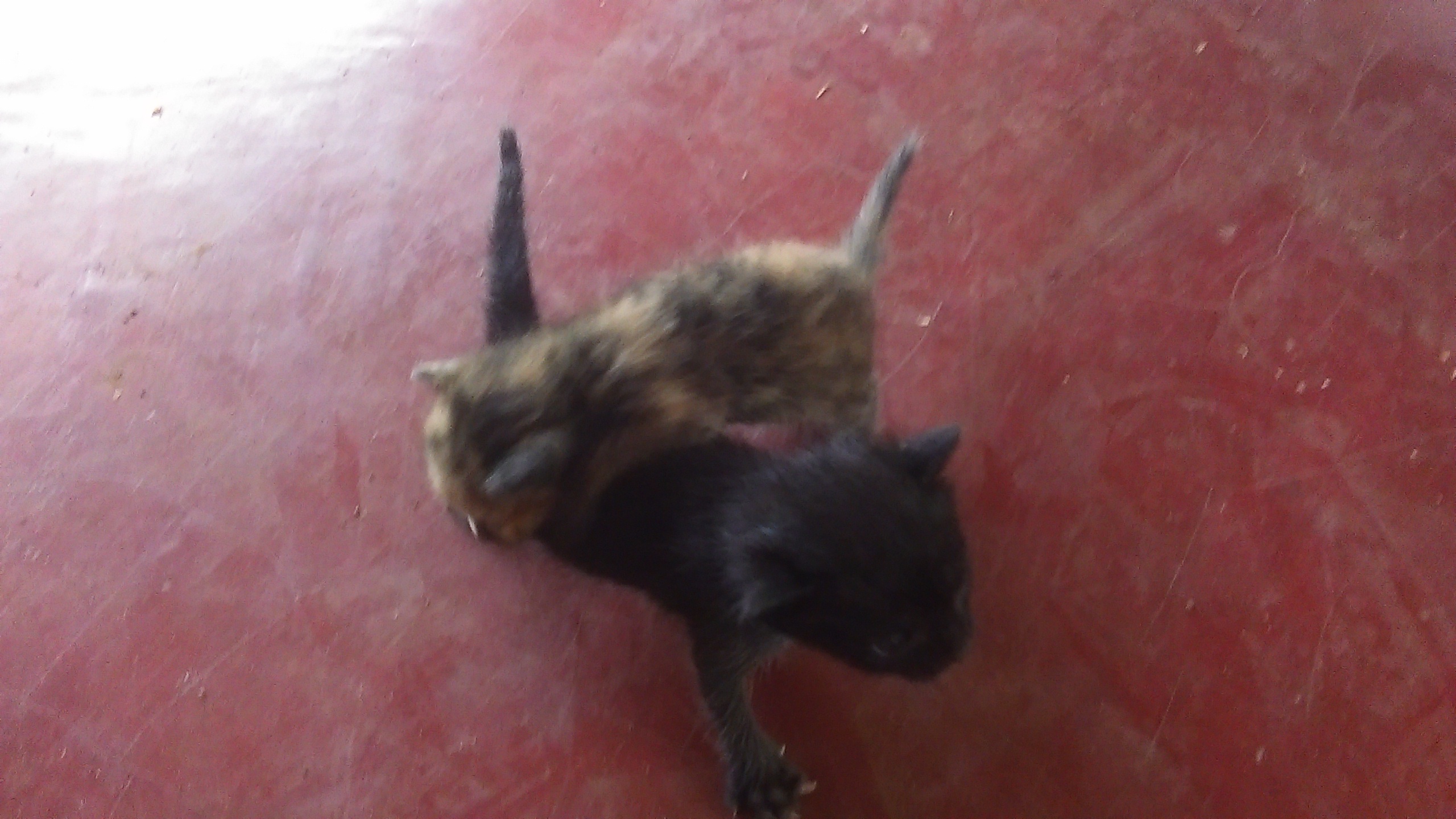