Our first project out here in Nicaragua was in the beautiful colonial city of León. Our time there was a huge learning opportunity for all of the team. Mid way through the project we went on a field trip to help us understand the context of the projects we’re working with and presented our students and ourselves to the city of León.

Learning is often a challenge and this experience was more challenging than most, but the team walked away with renewed vigor and some insight into where the kids we’re working with come from and why our works is so important. With this fresh perspective we returned to work, preparing these eager performers for their big presentation in the main city square.

In 2009 Leon’s municipal garbage dump was moved away from the historic fort of León, a site of major significance to the Nicaraguan revolution. The local government has allowed the construction of large township on the site of the former dump which currently survives on contaminated water pumped directly from the site.

The new garbage dump supports a large number of families who collect recyclable materials in exchange for a small cash redemption. Children as young as 6 work amongst burning refuse, toxic fumes and medical waste where a family might be able to collect 50 kilos of plastic and metal to earn around 30 córdobas each day ($1).

Some of our students still work with their families at the garbage dump and many have been relocated to new neighbourhoods away from the site. One of our partner organisations works with families to get these children into school, providing them with lunch, dinner and after school support easing the economic cost to their families and ensuring children get the most out of primary and secondary education. 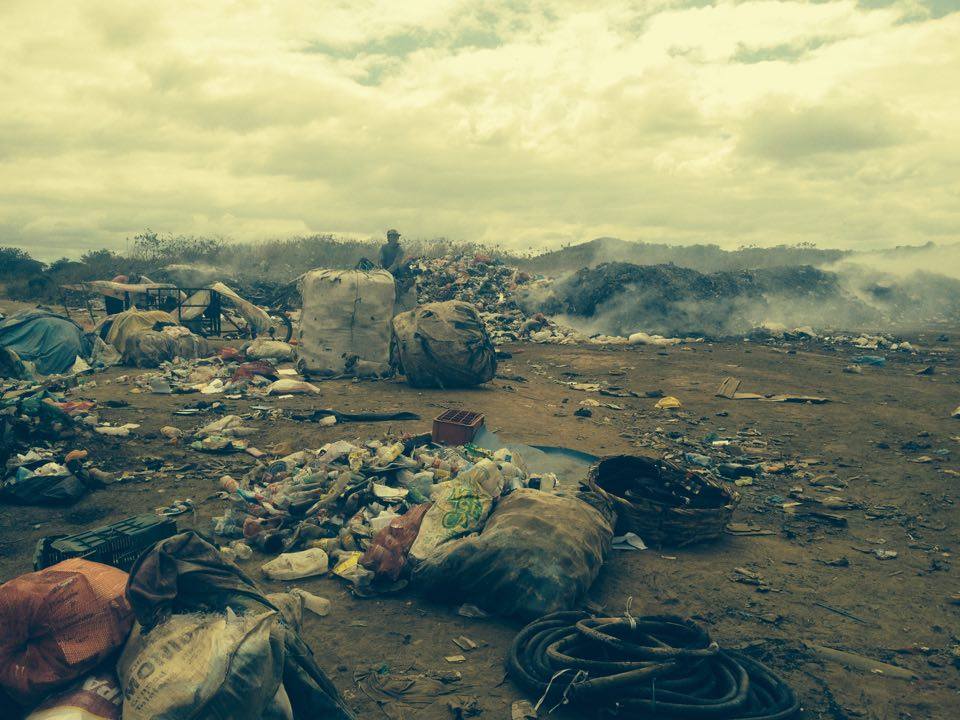 We regularly work with many of the children who have been affected by living or working at the garbage dump and we run an after school club with these Niños Y Niñas Del Fortín (Boys and Girls of the Fort). Whenever we arrive at the community centre we’re greeted by smiles, excitement and more often than not, a ton of kids eagerly playing with hula hoops. After a warm up and a few games for focus we open up a number of teaching stations and we teach a huge range of skills to sometimes over 40+ chavallos (kids). Their favorites are hula hoops (of course), acrobatics, juggling and diabolo.

In contrast to the large group of kids at Niños Y Niñas del Fortín, the kids from Chavaladas are a smaller close knit community of boys. Our time with them is often more focused but equally as energetic. We spent several weeks preparing this group of boys from the ages of 8 to 17 to present their talents as a pre show to our own presentation in Leon´s main square.

These guys work great together, often supporting and encouraging one another, sharing skills and tricks between themselves. One of the most uplifting moments with these guys was a spontaneous, undirected clowning parade based on an exercise we´d taught them the week before. When those 3 guys started flocking together, we know, that had to be in the show! 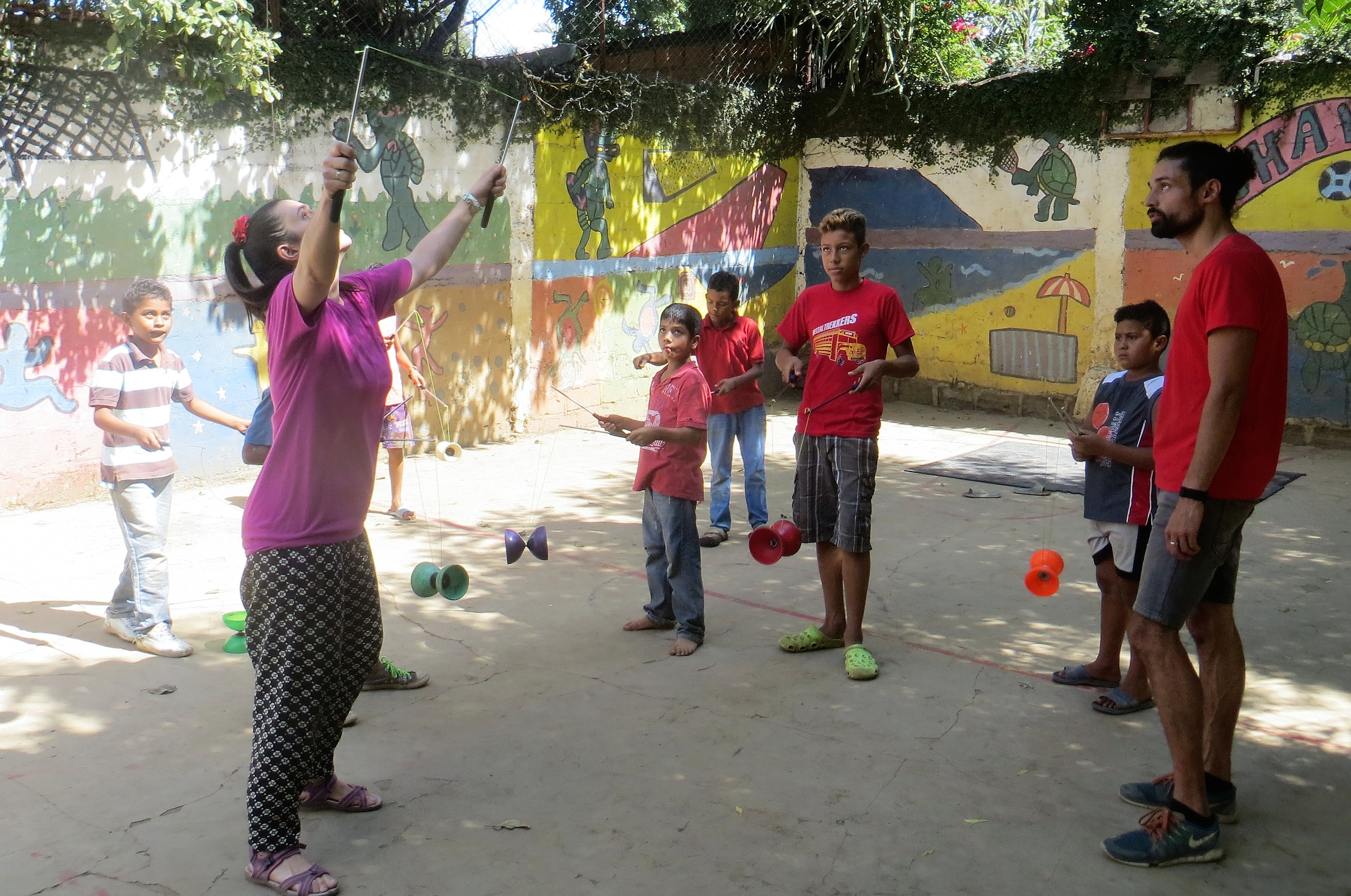 By far our biggest show in Leon was collaboration of performing groups in Leon´s Parque Central. We were joined by Los Artistas del Nido, Los Zankistas and the boys of Chavaladas in front of an audience of several hundred Leonese, tourists, volunteers and the families of the Chavaladas boys.

The boys presented their skills on stilts, with hula hoops, club juggling, clowning, levitation wand and acrobatics to a rapturous, encouraging crowd. We combined our own performance with an Nicuraguan and international group of performers as our troupe of confused and clowning tourists journeyed our way through club juggling, contact ball, hat manipulation, hoop and some hilarious acrobatics. We wrapped up the evening with a spectacula fire performance, blending danger, magic and world class talent which raised several thousand córdoba for our partner projects here in Leon. The boys left exhausted, proud and smiling and we were delighted to see all their hard work come together. 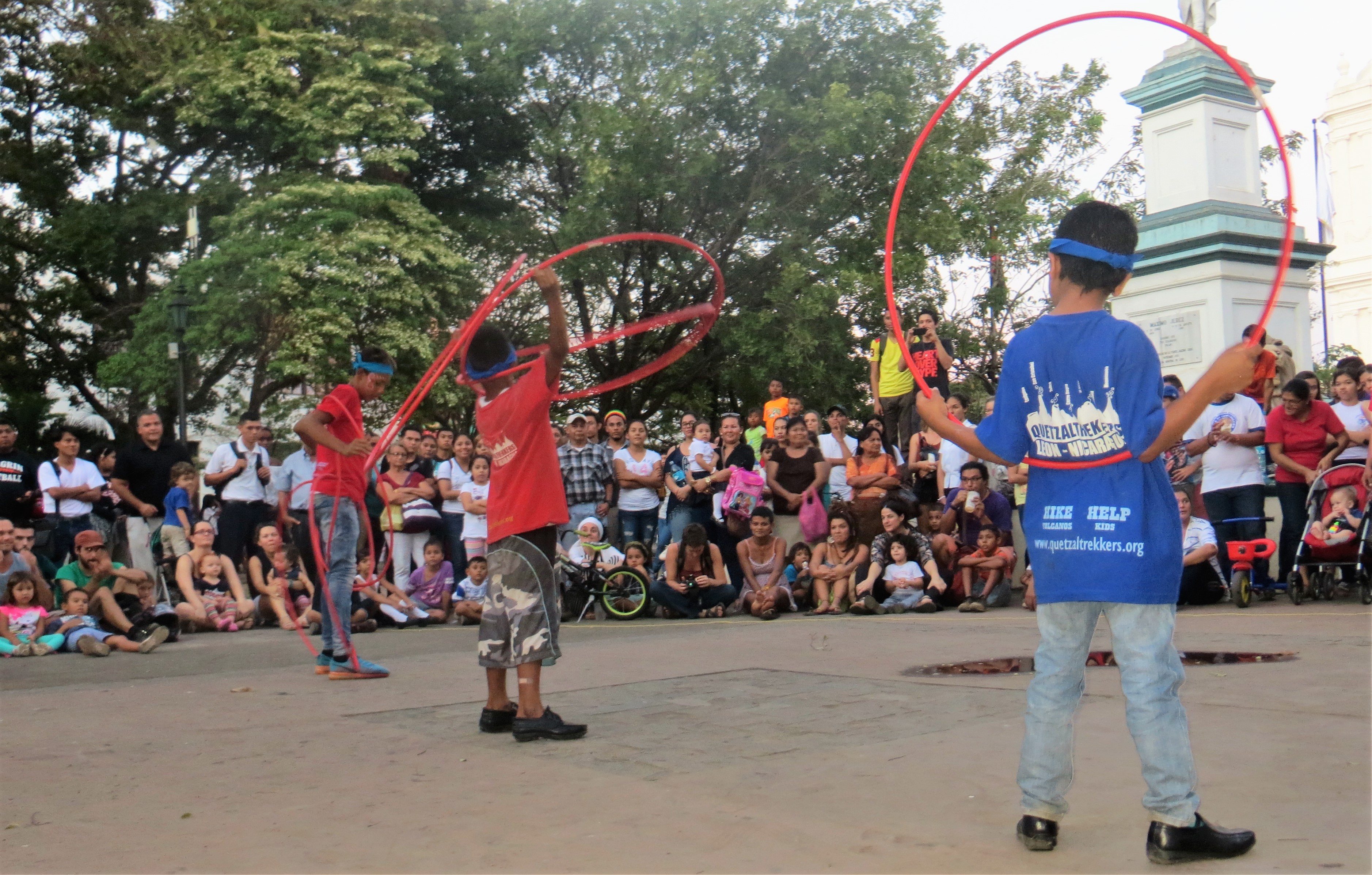 Working with an awesome group of motivated and excited kids, watching them go through a journey of trying out new and untried disciplines, discovering a new favorite or continuing with an existing passion was an enthralling experience. One that reminded me and my team mates of our own journey of discovery with circus and performing arts. From discovery, to development, performing to teaching, the love of our arts goes round and round, as we say so often in our workshops, en un círculo (in a circle)!

Until the next edition, adiós from me, the team and from Nicaragua.