San Marcos week 2: A Rhyme for YOU!

Second week in San Marcos and the mornings are a go!

Boys are baking bread; girls have projects to sew
Despite their busy day, Los Quinchos always come around
In time to work their circus skills and find their inner clown
And so we focus on their theatre skills in preparation for their show…. 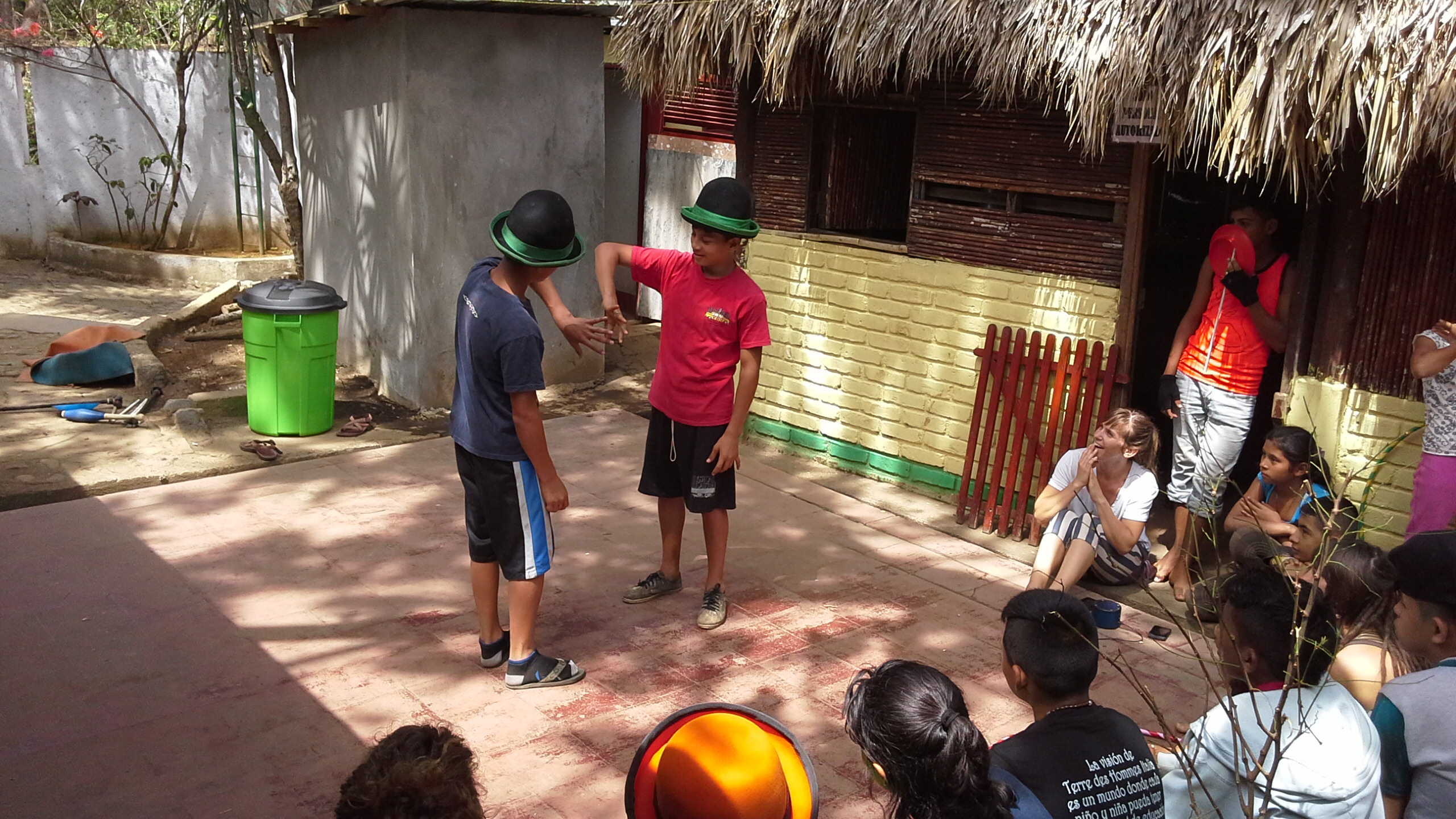 Contact staves, hats, and flower stix constantly flying through the air
In open box sessions with loads of props that the children have to share
But it’s the first of March – only a month left for this tour!
Only a slice of time exists to leave them with more than they knew before
And empower these future adults to create art and movement that is solely their’s. 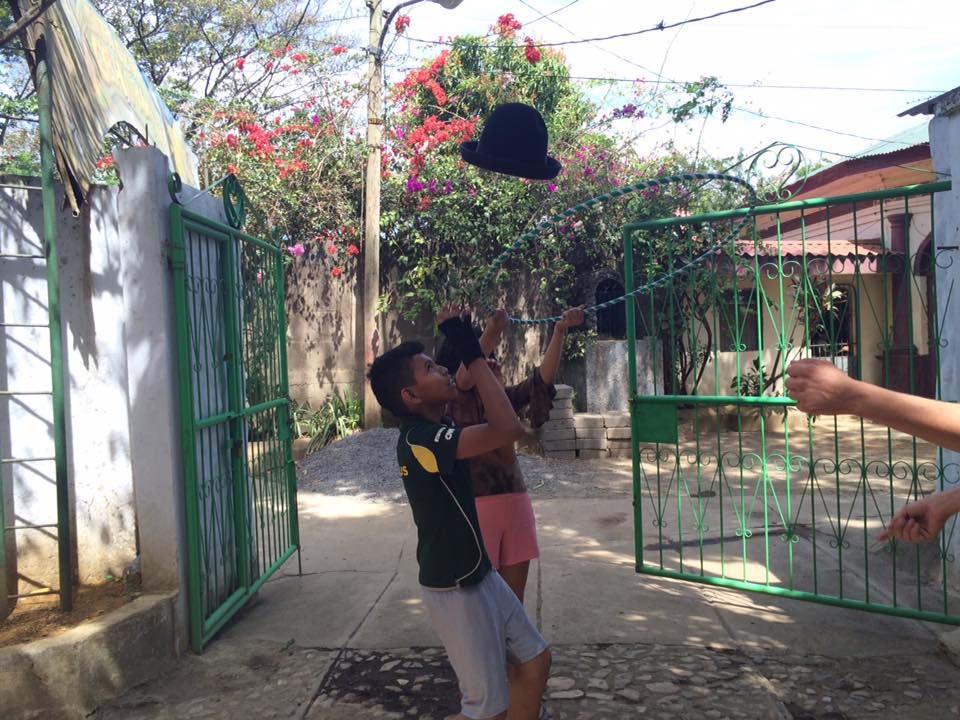 Los Quinchos love their dance battles – for a moment, all distractions disappear
And in class they build sequences guided by music they’re encouraged to feel
It’s not all picture worthy smiles and focus; adolescence comes with the requisite drama
And we’re reminded at times that these wonderful kids come from an unfathomable amount of trauma
So we encourage the practice and hope these lessons of circus unlock the doors to help them deal. 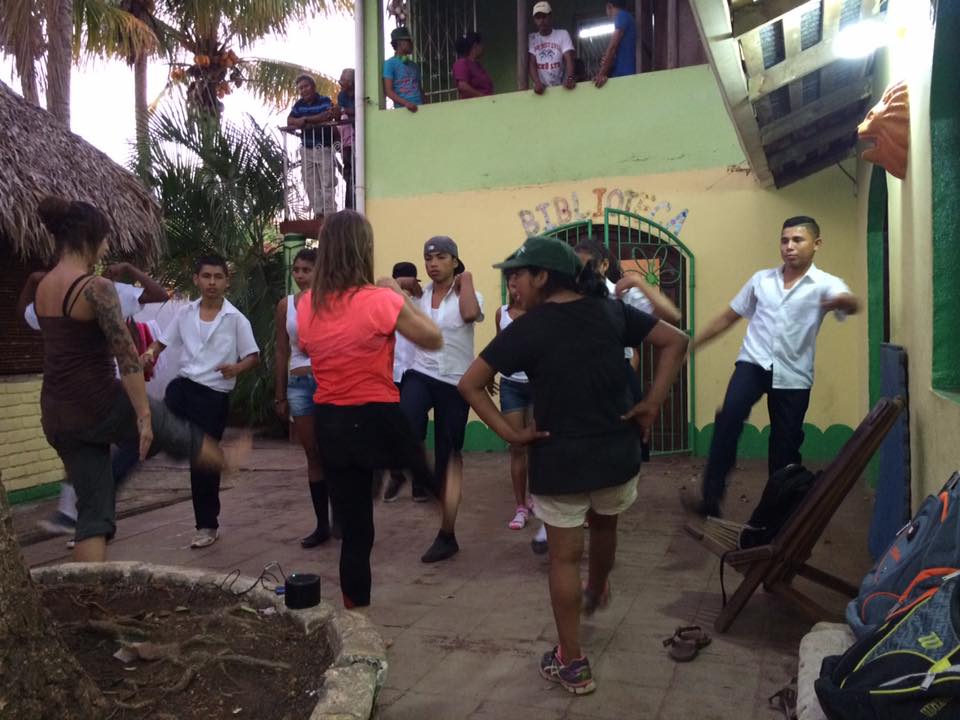 The Quinchos dancing up a storm!

THE WORK DOESN’T STOP THERE! 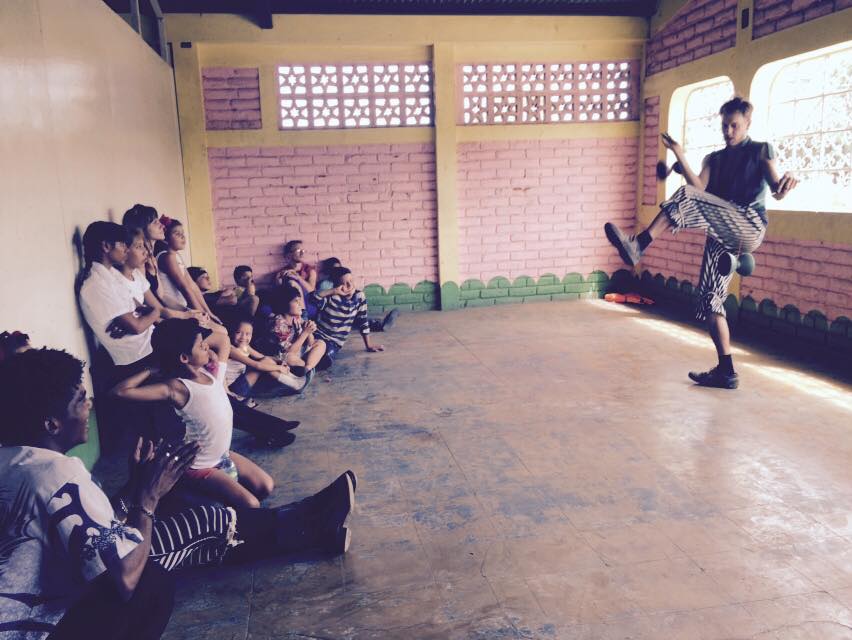 Riding that last wind to perform for the Casa Filtro kids

Our volunteer team of eight

Rise early to Thursday rain,
And though one has flu-pain,
another’s foot sprained
and a third has a case of the runs,
We hop a truck for Managua, load up on agua
And perform our show to some schools for fun. 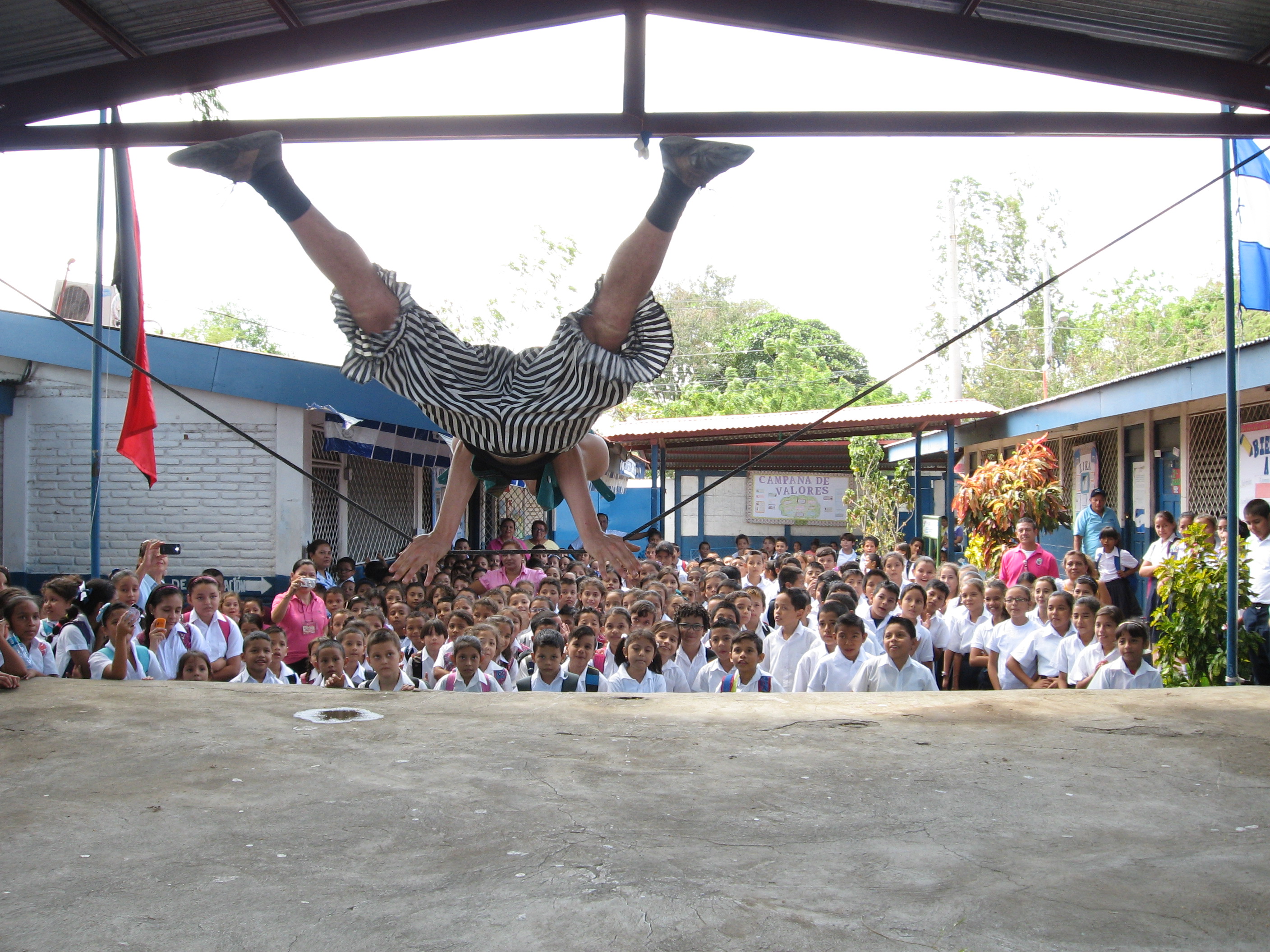 Jacob wowing the crowd at Santa Rosa School in Managua

Given fruit salad, chicharron tacos & sweat from the heat of the city
We entertain at one school’s “Dia Internacional Sindrome Down*” to celebrate diversity
Friday morning our crew took a Children’s Hospital visit (I had to miss it-that flu pain refused to let me off the hook)
And the vibe couldn’t have varied more than what the afternoon had in store – squealing kids requesting signatures in their notebooks!
The last venture of the day brought us to the Casa Filtro’s* lay – an impromptu show performed by a crew rather tired, hot, & dirty. 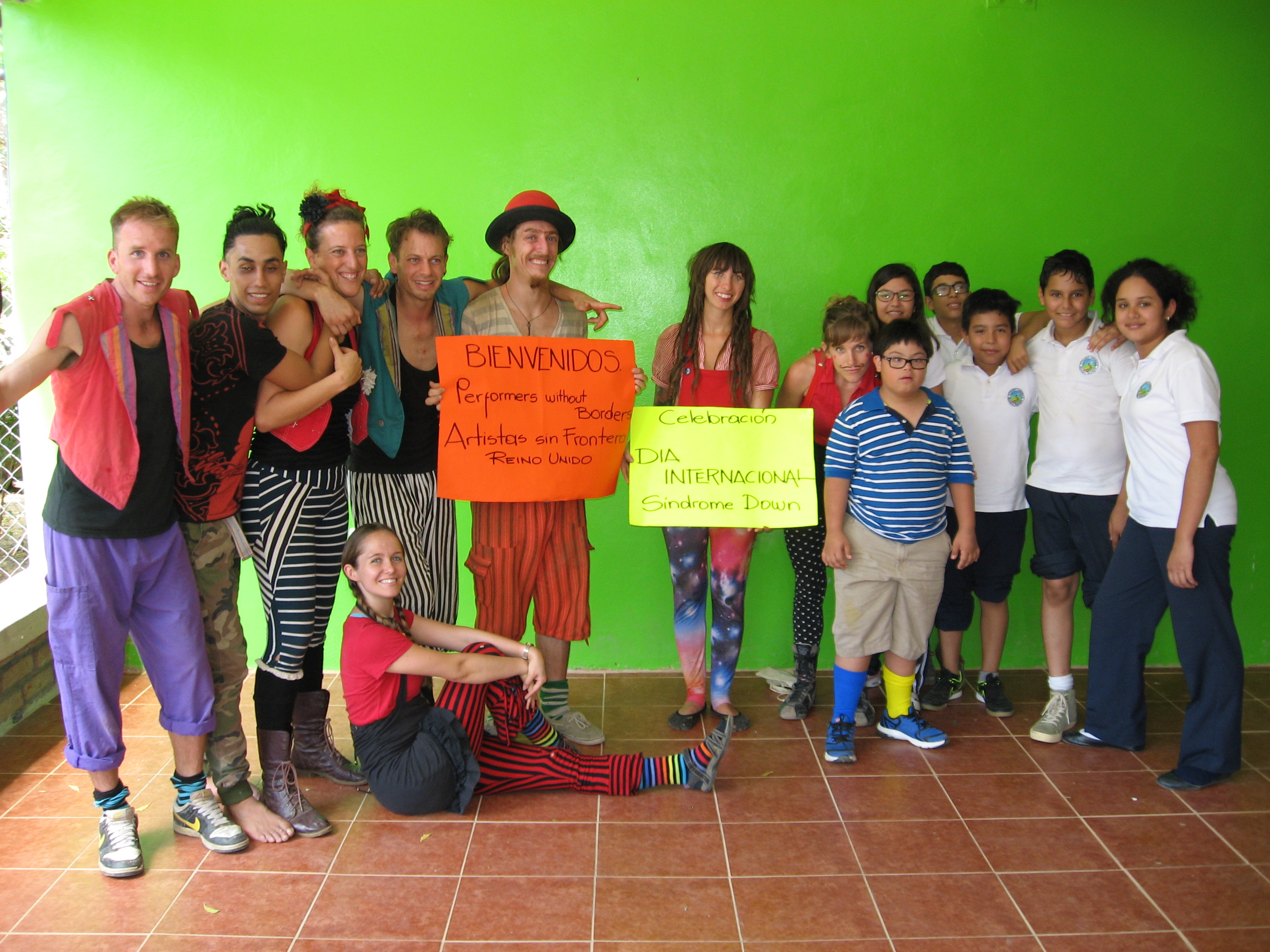 Día Internacional Sindrome Down celebrations with the PWB Circus

Some of us part ways for our short break – my body aches still refusing to vanish
And I couldn’t decipher if I was worse or slightly better, bedridden watching “The Karate Kid” in Spanish
On Sunday we reunite forces to continue the courses of our epic Session o’ Circus
Onward and upward with practice: Hoop! Unicycle and Acting! Liberated with a sense of purpose.
Ready to take on these little phenomenons & turn their hardship into their advantage. 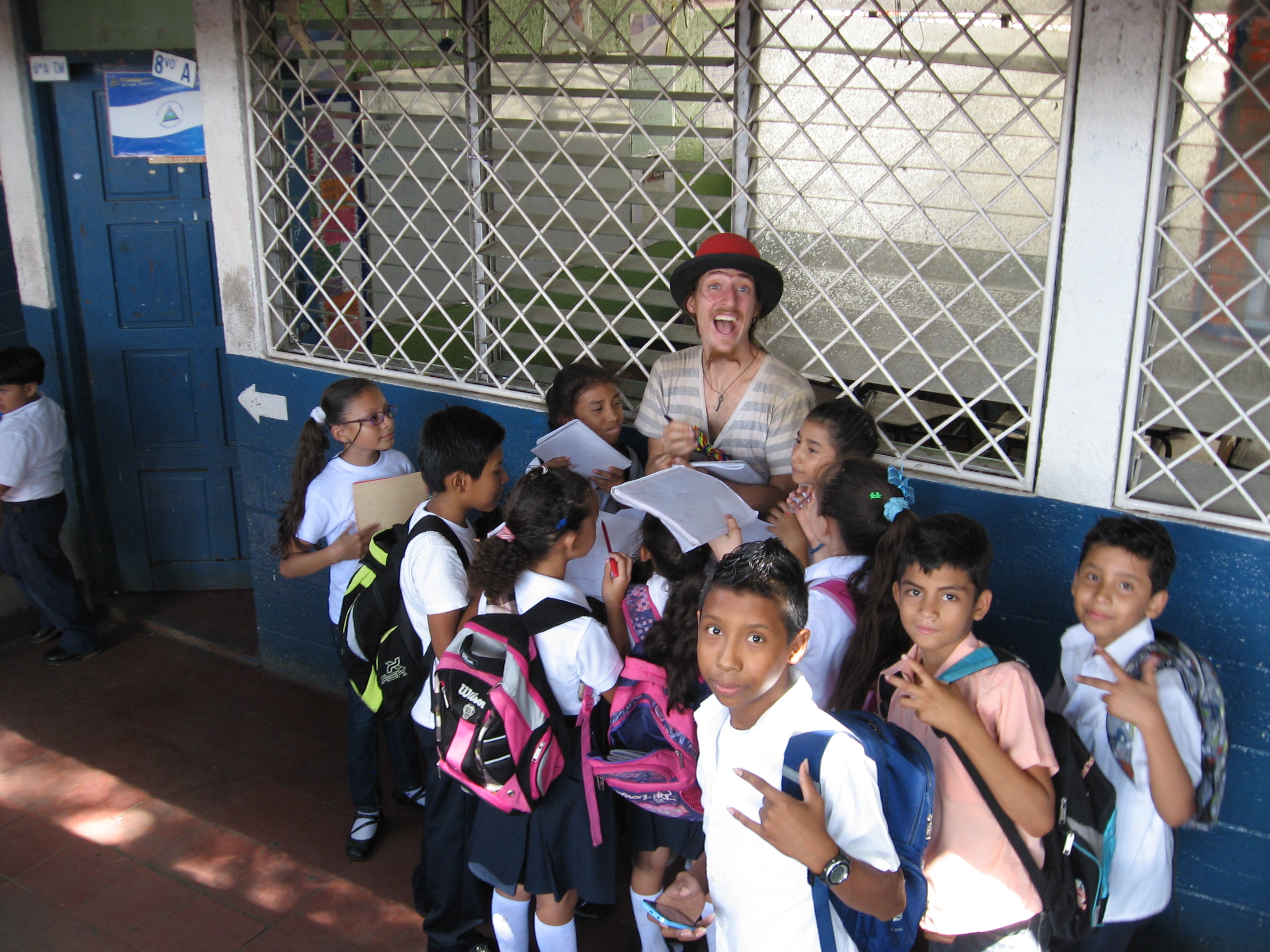 Día Internacional Sindrome Down: International Down Syndrome Awareness Day
Casa Filtro:  The Filter House, where the kids are placed after being rescued from the streets, and where they are fed, cleaned, rehabbed/receive treatment for months before heading to the Los Quinchos farm.
-Aileen