Namaste from the India 2015 team! Namaste is also a farewell. The light in me sees the light in you, and as we complete this year’s tour we are all shedding light and gratitude for each other and reflecting on beautiful and successful projects. It’s truly amazing to think of all that has happened in the last 3 and a half months!

January 1st, we all made our way to Gokarna and Kudle beach to meet each other and dive in to boot camp. Our show, Yatra, came into form with some many wonderful threads of inspiration and magical syncronicities, with the message of everyone you meet on your journey is a teacher, and even yourself. The show features Tara, played by Emily, on a quest to find her magic hula hoop, and finishing with a spectacular doubles hoop routine that Mark and Emily have been perfecting. And of course a group dance routine and acro pose finalé…. And a fire show! At boot camp, we learned many theater and clown games as well as getting a taste of living with each other, not to mention all of us experienced illness in India… This would not be the last.

Then we travelled across the country by train for 35 hours to Kolkata, our new home, our first project. Working with the Hope Foundation, we taught and performed Yatra for hundreds of children’s from the slum areas of Kolkata. Notably, Lillian taught many young girls a theatrical self defense exercise, and we taught many games with props, including Mark’s ISO hoop clowning. There was so much laughter, inspiration, and joy spread through PWB. We were very grateful to experience this. At one workshop as we introduced Magnus, his name changed to Mango, and stayed thus for the remainder of the trip. 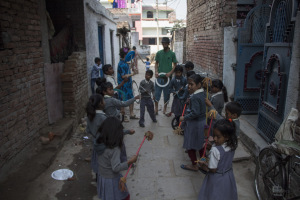 By February we moved on to the holy city of Varanasi on the sacred Ganges River. PWB has the longest relationship to a project  here with the Asha Deep VidyaAshram.

Our fearless leader, Chez, was very excited to reunite with some of the kids she remembered from a couple years ago, when she was a volunteer.

We had 4 days a week after school with Asha Deep, developing more of their circus talents, in preparation for their big show on Ravidas Ghat. These kids are advanced to the point where a lot of them are performing with fire props! Poi, staff, clubs, fans, and palms. The PWB group, led by Avi with all of his fire knowledge, conducted many safety sessions in this area, and the kids eagerly focused knowing how powerful fire is. 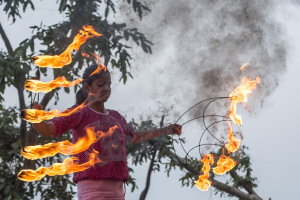 The PWB volunteers also taught many children at Duniya School, and they really enjoyed many of the workshops, including juggling, acro balance, clown (or joker as they say here) singing, and much more. Lillian even facilitated a community banner with the school, where almost everyone had a hand in it!

We also shared Yatra and mini workshops with several area schools and foundations, including a space in a wonderful community garden project. 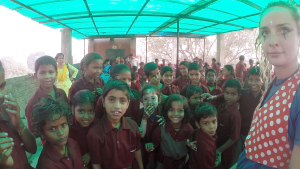 After one month in the bustling Varanasi, the group parted ways for a one week break. Mika, Avi, and Lillian headed to Kathmandu, Nepal, where they connected to a school for orphans, and taught a one day workshop and did a mini show they created in 2 days, called Chickens Birthday. This is where the famous line, “kukra le kukra le kaane

So we all reunited in Darjeeling, India, by March 15, and with a new member of PWB, Manish, a long time circus student from Varanasi. He fit right in, and added so much to our very international group, with specialties in poi, and face balancing random objects. Darjeeling, The beautiful Himalayan tea town was colder, wetter, and a bit more shanti, peaceful, than previous locations.

We began playing and teaching with the Edith Wilkins Street Children Trust Foundation, EWSCTF. These kids come from difficult situations, as well, a lot from Nepal, or Tibet, trafficked for cheap labor. So until recent years, Child labor has been quite socially acceptable, and now there is a growing dialogue about why this is not ok. The annual child rights day in the central plaza, Chowrasta, explains statistics, and gives information using performances, by children and adults. After spending a few weeks with the EWSCTF kids, we supported them performing an incredible circus and dance show for child rights days. A few days later was foundation day, Celebrating 12 years of the EWSCTF! A home for many street children, and they provide healthful meals, and opportunities for the kids to attend school, and also learn creative arts such as music and circus! 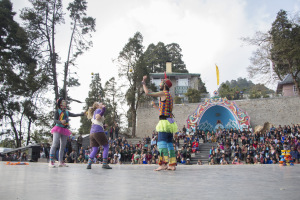 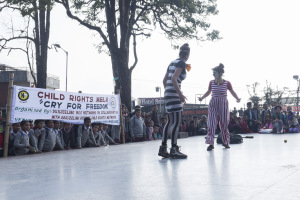 Our outreach in the area was also magic in the making, including a show at a convent school in Kalimpong, working a couple days at the Salvation Army school with deaf children, and a superb final Yatra for Little Paradise Academy, for the children of parents who work at a tea estate in Pashok.

We adopted a street puppy for the last week! She found us on the full moon, eclipse, on April 4th so we named her Luna.

The last days have been a mixture of feeling full with joy and love for the children and the projects, and empty, as the group performed our last show together, and preparing to leave our circus family we’ve grown together. I must say, what an amazing experience to meet complete strangers and then live, travel, eat sleep, play, teach, and perform together in a vibrant and intense country such as India! This is truly a unique and life changing project, for the volunteers. For the children, it’s evident how this work/play gives them full permission to grow through play and art, and cooperation, and trust. We’ve witnessed many of these children develop skills very quickly, along with confidence. They are so hungry for this program. They love when PWB comes to town, and they express such gratitude for the teachers.

Let’s continue developing this model, of social circus that serves to empower children, adults and their communities. It is a reason to come together to play, create, and perform this then for all to be inspired. PWB is moving towards a sustainable program as the local circus students are stepping up to become teachers in their own communities. Manish has been in training with us, learning what it’s like to be a teacher, a performer, a team member, and so much more. He holds a lot of knowledge and motivation to get a year round project going in Varanasi. 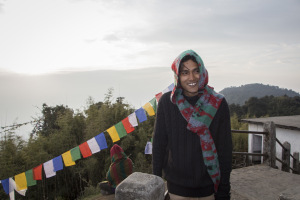 This is the model, that eventually PWB will not need to keep going back because the local circus youth will take the reigns. Giddy up! Performers without borders will live on in many ways!

I’d like to close with a quote. From Lilli, “When I think of India, I will think of little children holding hands in front of their hearts and saying namaste, cows sleeping outside of temples, mamas who beg for milk for their babies, sadhus wandering the streets, the business man taking his shoes off and touching his forehead against a street side altar to honor Durga, the smell of poop, incense, and samosas, all at once, a wedding followed by relatives carrying their dead loved one down the streets of Varanasi… I think that the spirit in everything is acknowledged here.”

From Mika, “When I think of India, I will think of the beautiful smiles and laughter of children and adults… as well as looks of bewilderment.”

And from Mark. “When I think of India, I will think of… The toilet.”

Much love from India to all of you around the world! Thanks for being a part of a very successful PWB tour India 2015!