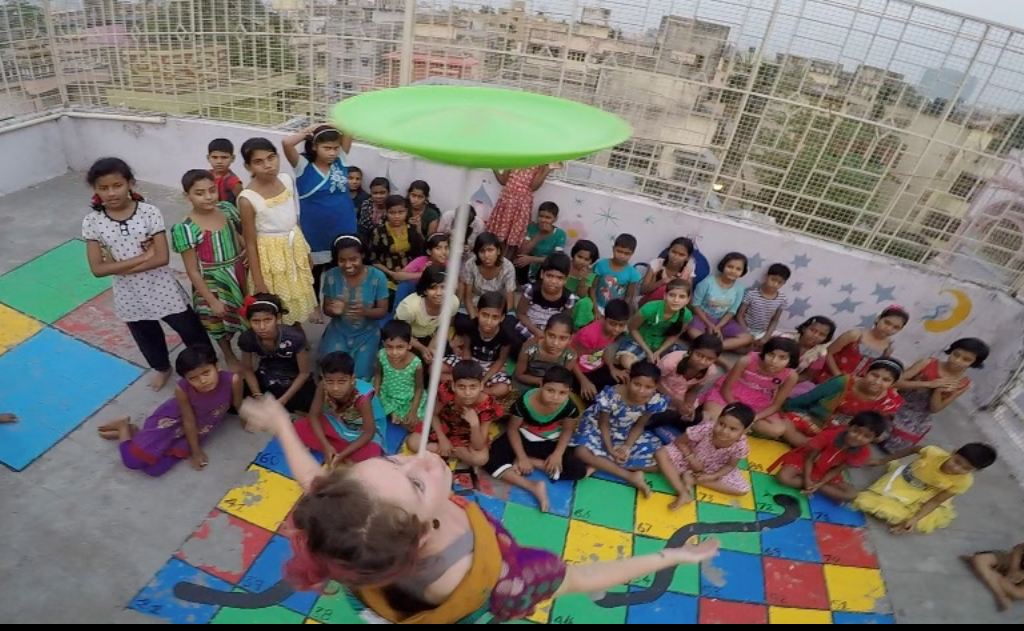 Avi is a circus and fire artist and teacher with company Pyrotechniq, specialising in staff. Avi is also a certified firewalking instructor, and enjoys clowning (not at the same time). He lives in Chicago and toured with PWB Team India in 2015. He is back for more this year and we are very happy to have him leading Team India! you can find out more about what he does by visiting Avi’s facebook page ‘Avi’s Imaginiarium’

Meike Schnapper, Germany, 19.  Meike’s home is in circus. She wants to give the same opportunity to other people, for it fills her life with so much laughter. She wants to use circus to change the world and believes that through this art we can teach self respect, awareness and hope; without competition and oppression. She hopes to transport these values through circus, especially at this time of needing a free society.

Grant Jensen, 26, Australia. A man who has passion for poi and delights in dance, as well as being proficient in many other circus arts. He combines his love of circus into his day job teaching science at secondary level. His favourite part of teaching is seeing a child progress and he says “they develop a sense of achievement and self-confidence from working through circus and they nearly always smile regardless of whether they can do a particular trick. I’d like to have the opportunity to spread that joy to kids who face some pretty big challenges and hopefully give them some of their childhood joy back”

Lynne Lee, USA, 25.  Ling Lee is a human bubble of energy and colour. Hailing from San Francisco, one of her main joys is to watch the fog eat the city. She has been performing in theatres around the bay area all her life, and doing circus arts for the last 4 years. She loves getting wacky with dance and storytelling. Her current favourite props to dance with are fans, buugeng, and rope dart.
She wants to share her art on a global level. To support underprivileged communities by sharing time together and exchanging skills and passions. To make connections that will last and make an impact on both parties.

Benjamin Bergeron, France, 36.  Ben is very excited to be part is the team as it combines his two passions; Travel and Circus! He has been teaching circus for years as well as performing his amazing skills! Imagine 5 ball juggling, 4 club juggling, devil sticks and cigar boxes, unicycle, slack line AND longline. PWB India is in for a treat with this huge range of brilliance.

Daniel Griffiths, UK, 26.  Daniel is totally dedicated to circus art as a tool for social change. He has experienced himself the powers of circus and in turn shares his experience and skill with all sorts of youth and community groups. He loves the Indian culture and to combine this with teaching circus art would be something he will never forget.  He has also spent the last few months cycling from Wales to Turkey, as a charity fundraiser!

Jamie Mulligan Smith, USA, 41.  Combining over twenty years of performance experience in theatre, dance, fire arts, and original spoken word with twenty years of experience working with children, Jamie is on board with her grassroots diplomacy and global peace making to offer her vast experience and to bring her dream of connecting with PWB a reality.

Johny Douglas, USA, 23.  A self confessed spinner of all the things! Johny has a strong love for growth, performance, and puns. He wants to help people and believes that giving back what he has loved is the best way to do this. Having been inspired by the work through PWB he is now part of the crew that wants to spread smiles and share joy.

Rowan Thompson, 25 from UK.  Playing with circus toys is Rowan’s favourite thing to do. She loves to teach, perform and play games; anywhere, for anyone, at any time of day, in the hope of bringing a smile and infecting others with the circus bug. It is her aspiration to share the joy of circus with the world, particularly with those that most in need. She is really looking forward to creating and touring a show with an international team of performers. Rowan says “I believe that together we can bring joy and hope and make children believe that their impossible can happen”.

Abi first toured with PWB in India in 2013, following on in 2014 by leading a tour there. In 2015 and 2016 she researched and then led the first tour to Kenya and she is back for more in 2017! Abi has just finished her third season working in Chaplins Circus in the UK as an aerial artist and seems to have an endless supply of energy!

Mira Unde, 26, Sweden.  Mira is a socialy aware chinese pole artist and acrobat who after graduating from circus school has spent her last ten months working full time in a NGO helping refugee families and homeless women.
In June this year Mira toured with Clowns Without Borders (Sweden) to Greece.Mira says ” I’m so, very much, ready to blend the social side of me together with circus artist me. I think i have lots of experience from all the parts that are important to this project, I think it might just be perfect for me’
Jess Herman, UK, 33.  Jess is a power house of a performer and community/youth worker. Having been on a PWB project before she’s back and raring for more as she brings her impressive hula hoop skills and positivity to team Kenya. She has a natural flare for sharing joy and we are very excited to welcome her back for more work this time in Africa. She has been working with young people and sexual health in Bristol and is excited to continue sharing this important knowledge around the world.

Francesca Chez Theatre Dunford, UK, 29.  Chez first volunteered with PWB in 2013, tour co-ordinated India in 2015 and has since been supporting the running of the charity in the office. She is heading out to Kenya to continue teaching clown, dance, music and yoga. She is excited to be performing for young people in orphanages, hospitals and slums in Kenya. Chez says “I can’t wait to get back out on a project and share what I’ve been learning. I am well excited to be involved in the new connections in Africa and continue offering outreach around the globe by sharing play and joy, it’s a human right! Especially in these turbulent times of change we must unite and remain positive”.
Nicholas Pegram, USA 24.  Like Peter Pan Nicolas was never a fan of the thought of growing older. He thought that growing up meant forfeiting ones imagination. He knows now that through circus this idea is untrue. He seeks to spread this life philosophy to as many children as possible, through drumming, dancing, fire performing, fooling, juggling, loving life and the magic of imagination. He likes to find balance as much as he can on ball, rope, rola bola, or simply the palm of his hand (or face).

Bea has been part of PWB tours for the last 2 years in both Nicaragua and India and returns to make it a triple dose of PWB fun in 2017! Bea is a super dooper hula hooper based in Brighton, UK. She is founder of the Hoop O Clock movement which started in the UK and has spread to Australia. Whilst not hula-hooping she is a flight attendant and considers herself ‘Spanglish’. Welcome aboard Bea!

Esther Fuge, 25, UK.  Esther initially studied as a contemporary dancer at The Place in London. Following her sense of adventure she started working as a circus artists with NoFitState during their two year tour of Open House. This stirred a passion for community work which led her to set up her own projects including Wales first hoop convention; Whoopi and a community performance company called Splatch.
For the last few years she’s been reassessing her career choice. She says “It’s been projects like PWB that I’ve been dreaming up and envisioning how it could happen. I know I will continue to work on community performance based projects and feel that an experience like this would inform and shape my personal and professional projects which in turn would affect the communities I would be working with, especially on an international level”.

Sam Goodburn, 22, UK.  This young circus artist has won multiple awards for circus including the British Freestyle Unicycle Championship and the overall winner of the search for the UK’s Best Circus Act. He has performed throughout Asia and the Middle East,at Glastonbury Festival and with NoFit State Circus and to audiences as big as 15,000 as a clown on a BBC arena tour.  After seeing first hand the effect circus can have on a under-confident, shy kids, he wants to spread the seeds for more children and use the main tool he’s got to have a positive impact on peoples lives. He wants to rediscover himself after doing one too many corporate gig. Sam says “I’m only 22 and I hope to have a long career in circus and I want to make sure I continue my journey with the right approach”.

Ali Wilson,32,UK/NZ. Ali has been performing and teaching circus skills since 2013. Specialising in hula hoops he has a passion for breaking down technique and helping people find their own inner performer. He has lived in 4 different continents, is a total travel addict and hopes he can bring his experience of working in developing countries to the PWB tour. Ali says of joining PWB Nicaragua: “This is literally the perfect synergy for the two great pillars in my life”

Eli March, 29, USA.  Professional juggler Eli March is known for his fluid style, originality, and clean execution. Eli produces and directs the theatrical LED and Black-light troupe Circus Luminescence and is a highly regarded teacher and performer at numerous festivals.
Eli truly believes that “laughter is the best medicine…The laughter and smiles of the children is a currency I would like to be rich in”