After a crazy 36 hours of transit on 2 trains and 3 taxis, we reached Ahmedabad, where we had to kindly explain to the chai walla that we didn’t want any of his tea when we only had 1 minute to unload the entire circus off the train.

Whilst in Ahmedabad we partnered with Manav Sadhna, the outreach organization thats located at the Gandhi Ashram. They were so excited that the Performers Without Borders team were back again (5 years running) and greeted us ever so kindly. They had prepared for us an entirely new jam packed timetable, allowing the gifts we bring to reach an even wider community around, mostly new schools and sites from last year’s tour.

Our team met up with very diverse communities. We performed in one of the last leprosy communities, we taught clowning techniques and games to pre-school teachers in training and gave a multitude of different workshops in different schools and learning centres. Manav Sadhna helped arrange the access to 5 slum communities they support, multiple lower income schools and a special boarding schools for tribal village children. We’ve also been able to connect with many other new NGO’s which we are excited to create longer term projects with! 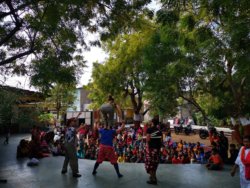 We are becoming stronger as a team unit, further connected and more capable to deliver our unified curriculum. Our time here in Ahmedabad has been centred around performing engaging entertainment for areas who lack access  to exposure of such arts. The show we’ve produced highlights themes of women’s empowerment, up-cycling rubbish into circus toys and self improvement through hard work and meditation. We are being overwhelmed with positive reactions and laughter from the children and adults alike. 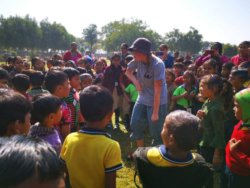 One of our biggest highlights was finding students who had constructed Rola-Bola’s out of old piping, bits of concrete and scraps of wood on our second visit to their school, this is after they saw us use one in our show a few days before! 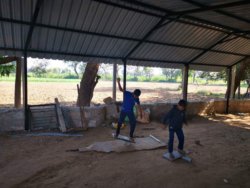 Not only have we been teaching and performing, but we have also been learning and receiving a lot from the children. Gujarati (the local language), traditional dancing, special handshakes and huge smiles!

Here’s a numeric breakdown of our work in Ahmedabad

We are so excited that this is just the beginning of what we can provide in these coming projects in both Varanasi, Darjeeling, and beyond! Now, we look forward to a two day train journey to Varanasi, where PWB is in its 13th year of returning and teaching! We are looking forward to connecting with the students old and new, supporting the growing youth group and finding new partnerships and continuing to make even more smiles. 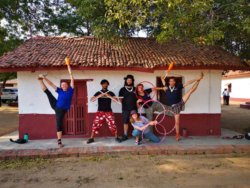 until our next update,