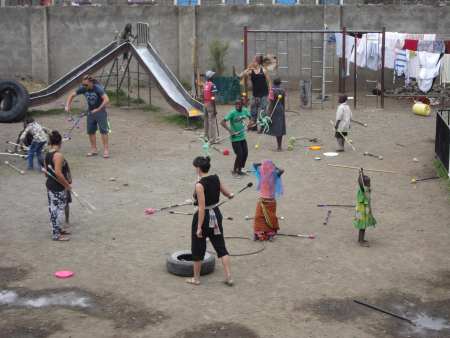 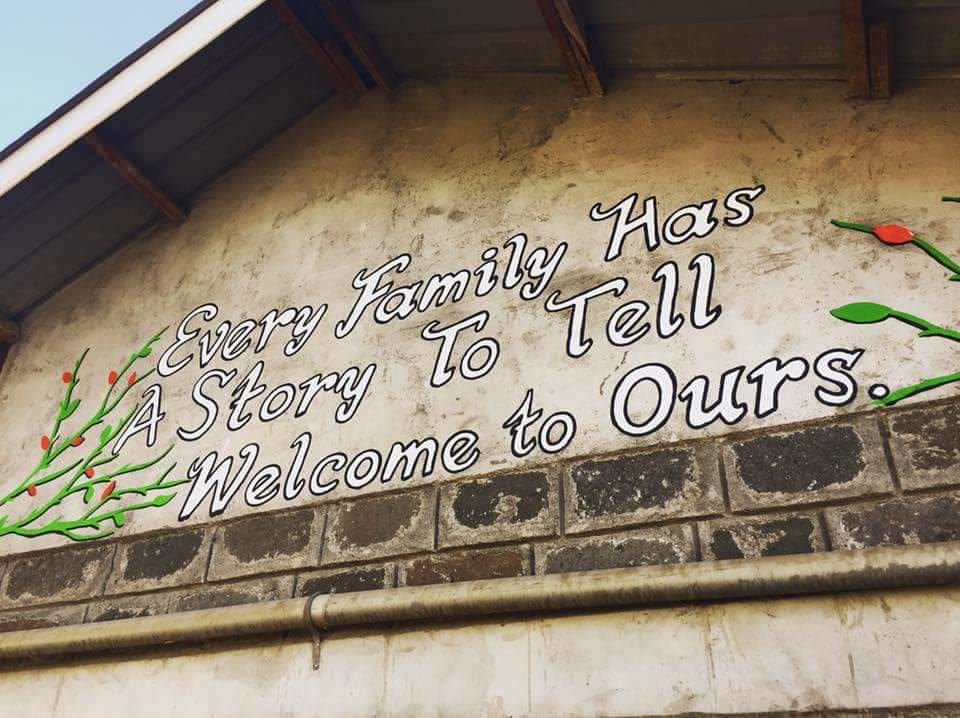 Following a wonderful first week, Team Kenya has continued to bask in the good vibes that have come to define our time here in Nakuru. Classes are running regularly, the children remain enthusiastic and engaged, emotional bonds are forming and being strengthened (both with the children and amongst the team members), our beloved Lucy – who helps with our in-house cooking and cleaning – returned after a short absence due to illness, recent outreach shows have been ridiculously fun, and the team is operating better than it has all tour.

The “long rains” have come early to Kenya this year.  Beginning last week, each day by around 3 o’clock in the afternoon we listen, watch, and feel as the winds begin to blow with an increased fervour, swirling the dust in the yard and heralding the heavy downpour that soon follows.   But while the skies may be dark and the air damp, the feeling inside Gabriel’s Learning Centre remains bright as the children’s laughter and excited play echoes through the concrete corridors. 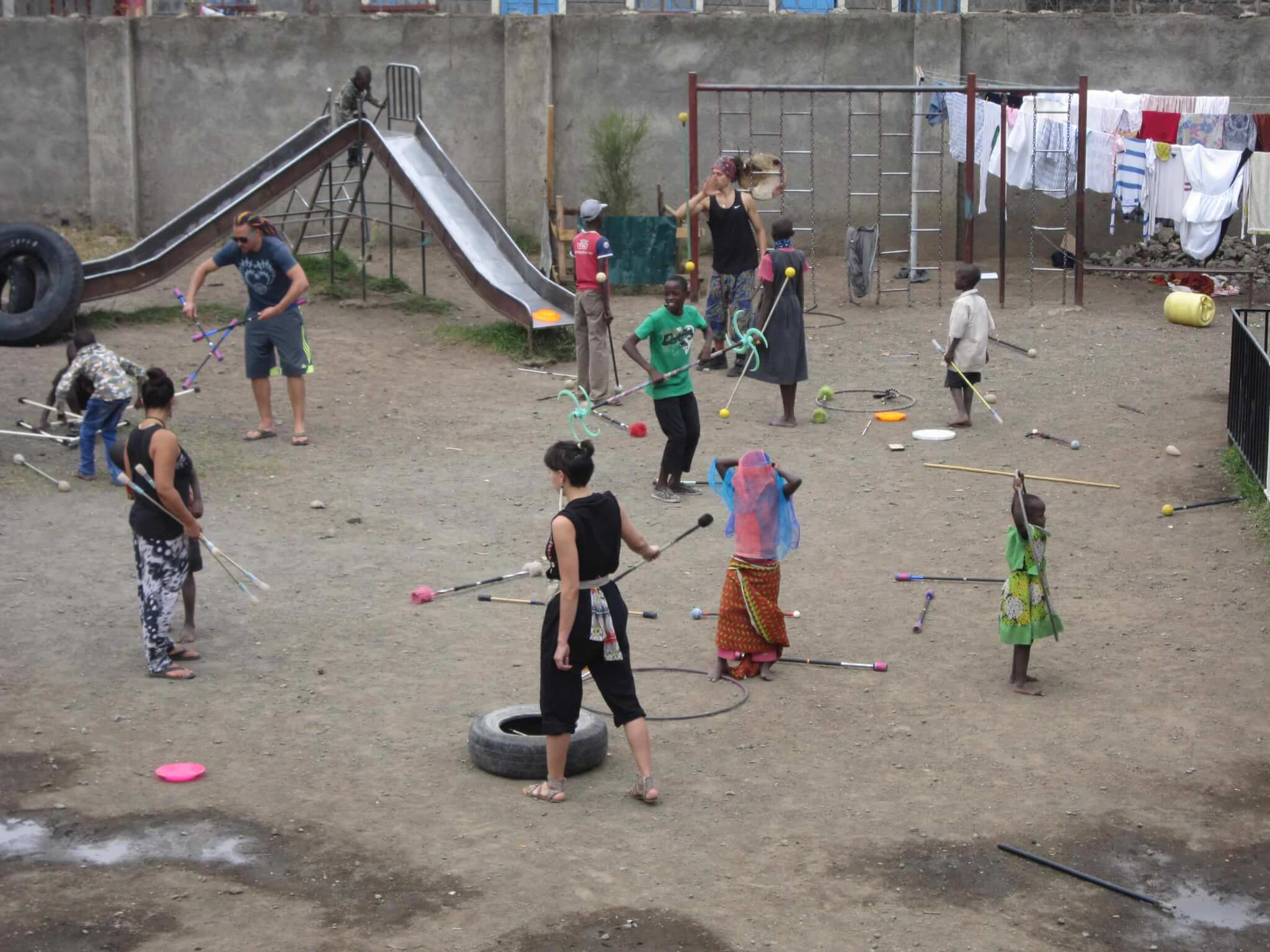 Our comprehensive curriculum for the school wide Physical Education program includes instruction in creative movement, acrobatics, tumbling, spinning plates, staff, poi, hoop, fans, juggling balls, juggling scarves, and foot sports (aka hackey sack and soccer).  Additionally we have been sharing several songs with the kids — they absolutely love to sing!! No sooner has a song been introduced than it can be heard floating across the yard or in the hall.  Watching the kids take ownership of these songs and make them their own fills us all with an incredibly warm feeling and solidifies our belief that song is truly a powerful way to spread joy and build community.

Several members of the team joined Angela, the resident social worker at GLC, on her weekly round of home visits here in the Kaptembwa neighbourhood.  This experience was especially insightful and emotional as the PWB teachers were introduced to many mothers (all of them single, with no male/father figure involvement) of various GLC students.  The homes visited were typically somewhere in the realm of 10×10 feet, without electricity or running water, and with one pit toilet shared with multiple other households.  The dark, cramped spaces housed anywhere from 3-11 children alongside the mother.  Most of these children come from different fathers, and almost all of the mothers began having their children around the age of 13. We heard stories of women who will leave their young toddlers unattended for an entire day so they can find work washing clothes in town; others of those who will prostitute themselves for 20-50 cents USD. 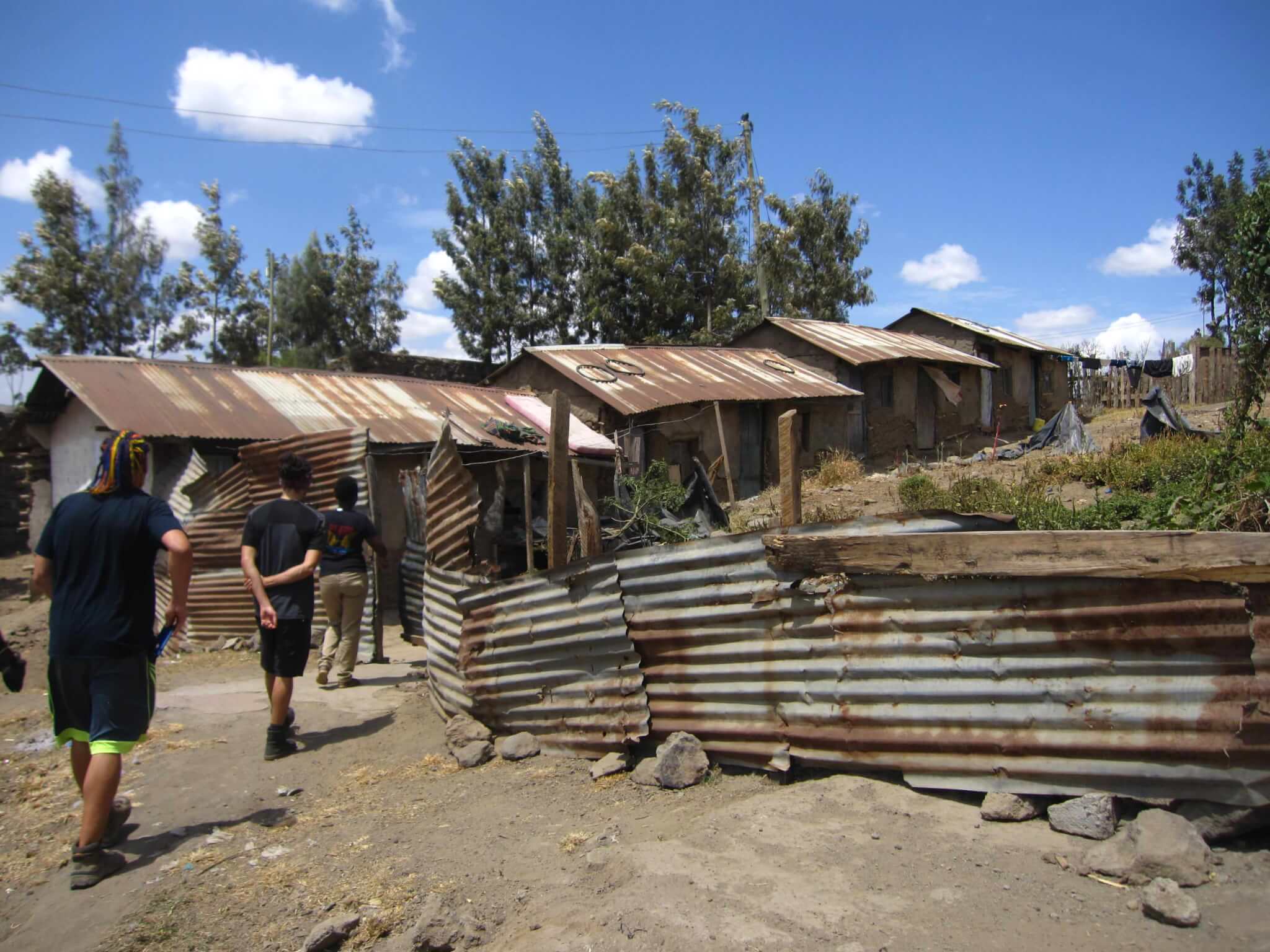 We encountered neighbors who stank of alcohol, found a toddler trapped in a trench running with raw sewage, and watched children bathing and playing in old wash water the color of mud.  Every mother welcomed us warmly into her home, and after visiting for 10-15 minutes, some would join us to a local duka (small shop) where Angela would purchase rice and flour for the family who, otherwise, had no food.  We learned that — in addition to providing day education for 270 neighbourhood children and residence for 50 orphans — GLC also sponsors the families (mothers and siblings) of their day students by purchasing food when necessary, contributing to school fees so that siblings can attend the public school, and paying medical bills.  Their work is extensive and commendable, and we are honoured to be participating in their efforts to serve the children and families of Kaptembwa.

Team Kenya enjoyed giving several performances this week.  Some of the GLC sponsored residents who are attending secondary school elsewhere returned this week.  Both they and Lucy requested that we do a fire show (as none had seen our previous one) and so we brought fire back to the GLC yard.  It was, once again, received with uproarious joy and the children chanting each of our names in turn.  Not only did they chant our names, but they also chanted the names of various superhero characters which they have assigned to each of us, such as “Master” and “Wonder Woman”.

We also performed two outreach shows this week; one for Pistis Home and Educational Center and another for the Alpa Stars Nursery School.  Our audience at the latter was doubled by several neighborhood families (both adults and children alike) hearing the music, wandering over, and joining in the fun.  Our show was followed by well over an hour of merry play, all to the repeat soundtrack of the “Odi Dance”, one of Kenya’s current pop favourites. The team had such a blast performing again after nearly a ten day hiatus that we have committed to doing two more shows in our third, and final, week which begins tomorrow.

It’s hard to believe that our tour is nearly over.  Mixed sentiments are starting to surface in the various team members; feelings of excitement to return home to missed loved ones or set out on new adventures, but also feelings of sadness and nostalgia for these children whom we have come to love and this land and culture which has, slowly over the course of the last 2 months, come to feel like home. 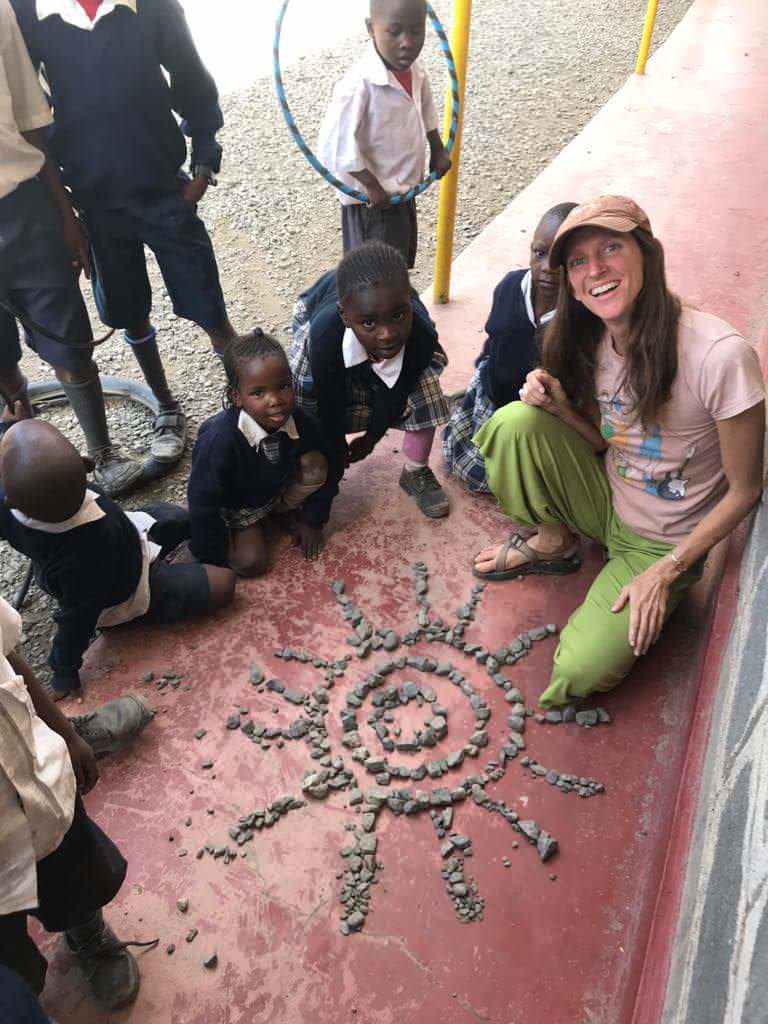