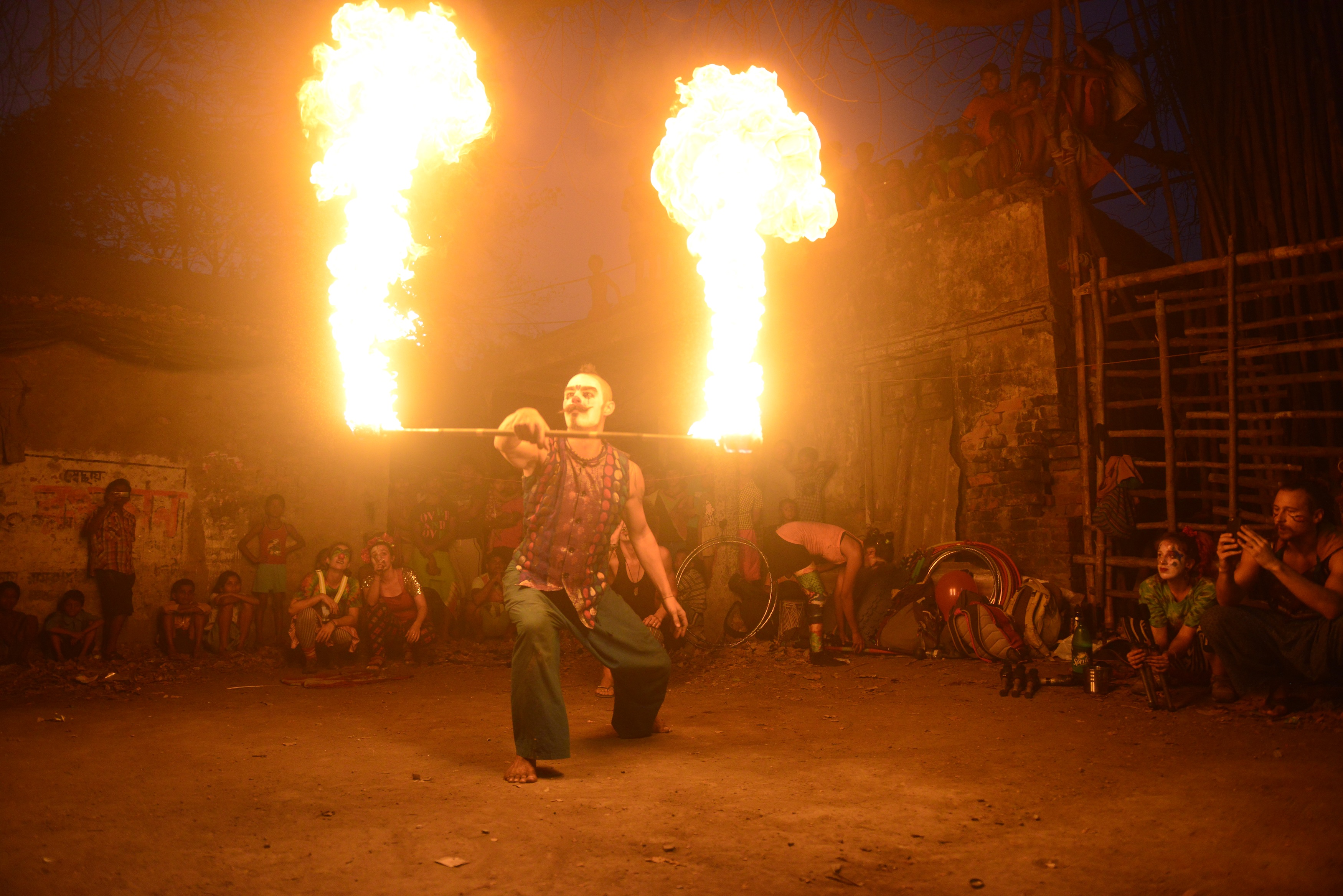 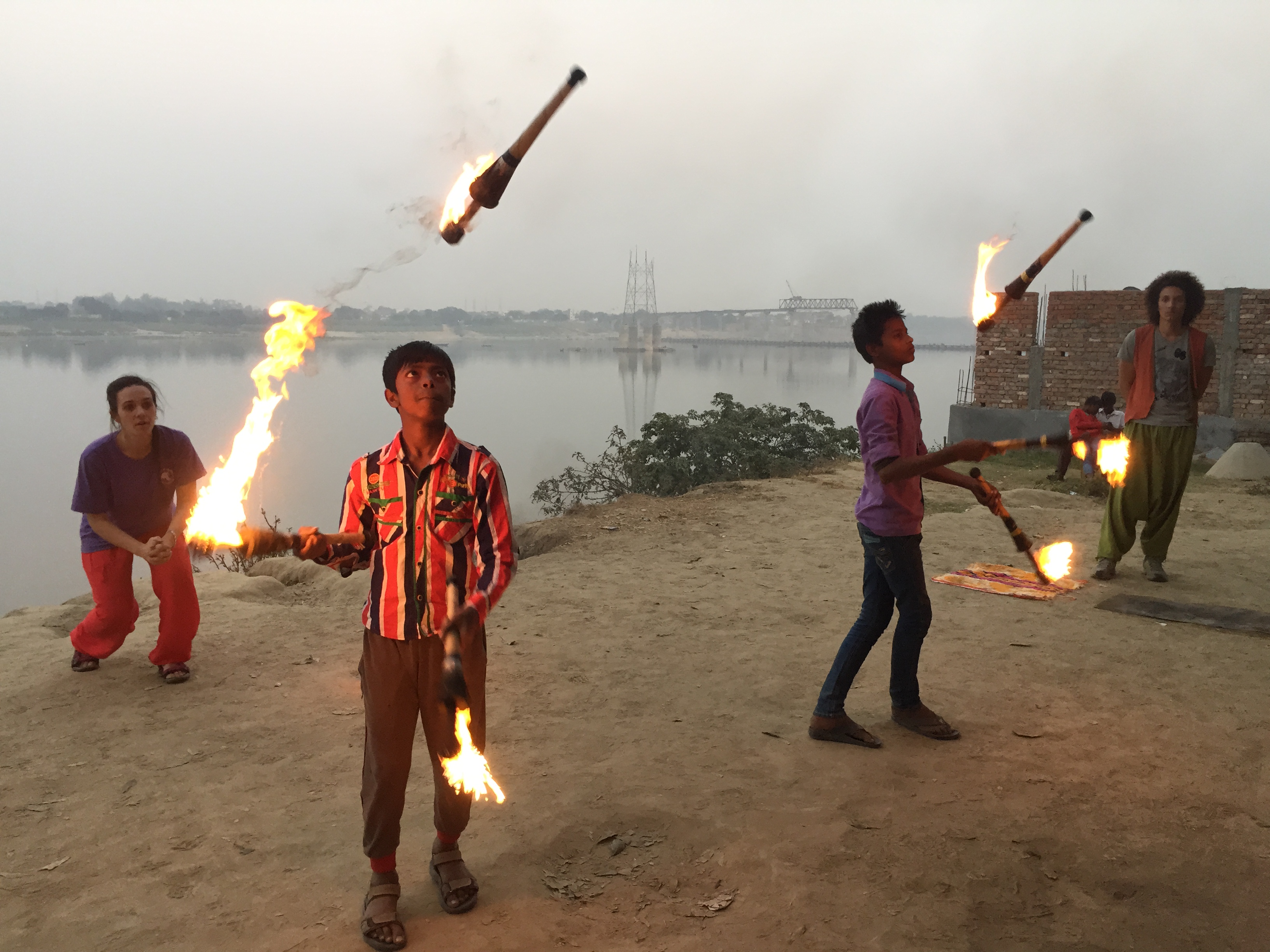 We have been working with children and performing in Varanasi for two weeks now but it feels like much longer. I literally had to ask myself “has it really only been two weeks?” as I wrote the last sentence. This city is ancient, yet filled with creation and bustling community everywhere. It is one of the oldest continually inhabited cities in the world and considered to be the spiritual capital of India. There is a fire on the Ghats (docks by the Ganges River) that has been continually burning for over 3,500 years. Varanasi is also known by the name “Banaras” directly translating to “City of Light”. You can feel the energy flowing through the crumbling buildings, swirling around the marble temples, and passing by every street cart and cow mimicking the flow of the Ganges River. 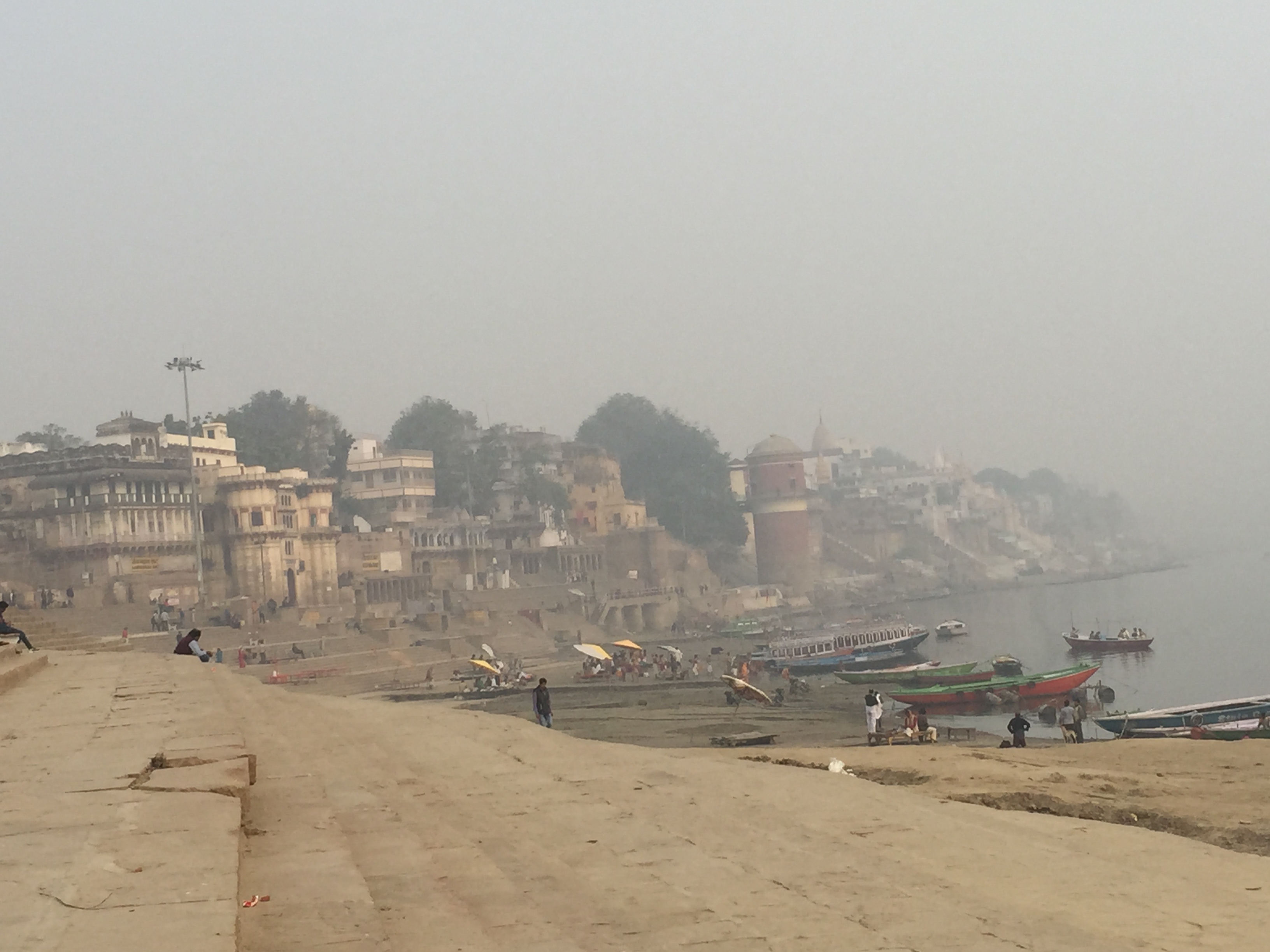 We have all become familiar with the city and its quirks. Constant pressure from the street vendors and rickshaw drivers while watching our step to avoid “mystery liquids” and cow pies keep us alert, but it is the children we are working with that have provided our energy.

When we are with the kids we are on top of the world (even if stomach issues keep at least one of us up most nights). The children fill us with light and the name Banaras takes on an entirely different and more significant meaning. We are all striving to be the light and radiate back at the children and I feel we are succeeding magnificently!

The kids at Asha Deep (one of the longest running PWB partners) are extremely talented and eager sponges ready to be filled with our knowledge. They jump with excitement yelling “Dada (male teacher) watch! Look at me! Look at me!” constantly. Many of the kids already know the basics of all the props and have started specializing in their favorites. I have been primarily working with the staff spinners and jugglers and we are making amazing progress. Several boys can do very difficult contact rolls with their staffs including Angel Rolls, Conveyor Belt variations, Steves, and even Jesus Rolls. The jugglers are passing clubs proficiently and working on doubles, doctor attacks, and collecting with style.

Several of the students from Asha Deep are even comfortable spinning fire and go out to the Ghats with us occasionally to spin publically. We are starting to teach them basic business ethics for street performing as well as fire safety for shows, crowd management, choreography, and stage presence. The attention they receive street performing is helping boost their self-confidence and we are always working with them to maintain a smile while still getting absorbed in their “flow state”. The crowds that have been gathering number in the hundreds and the cheers fill the night sky: Truly an amazing thing to witness. 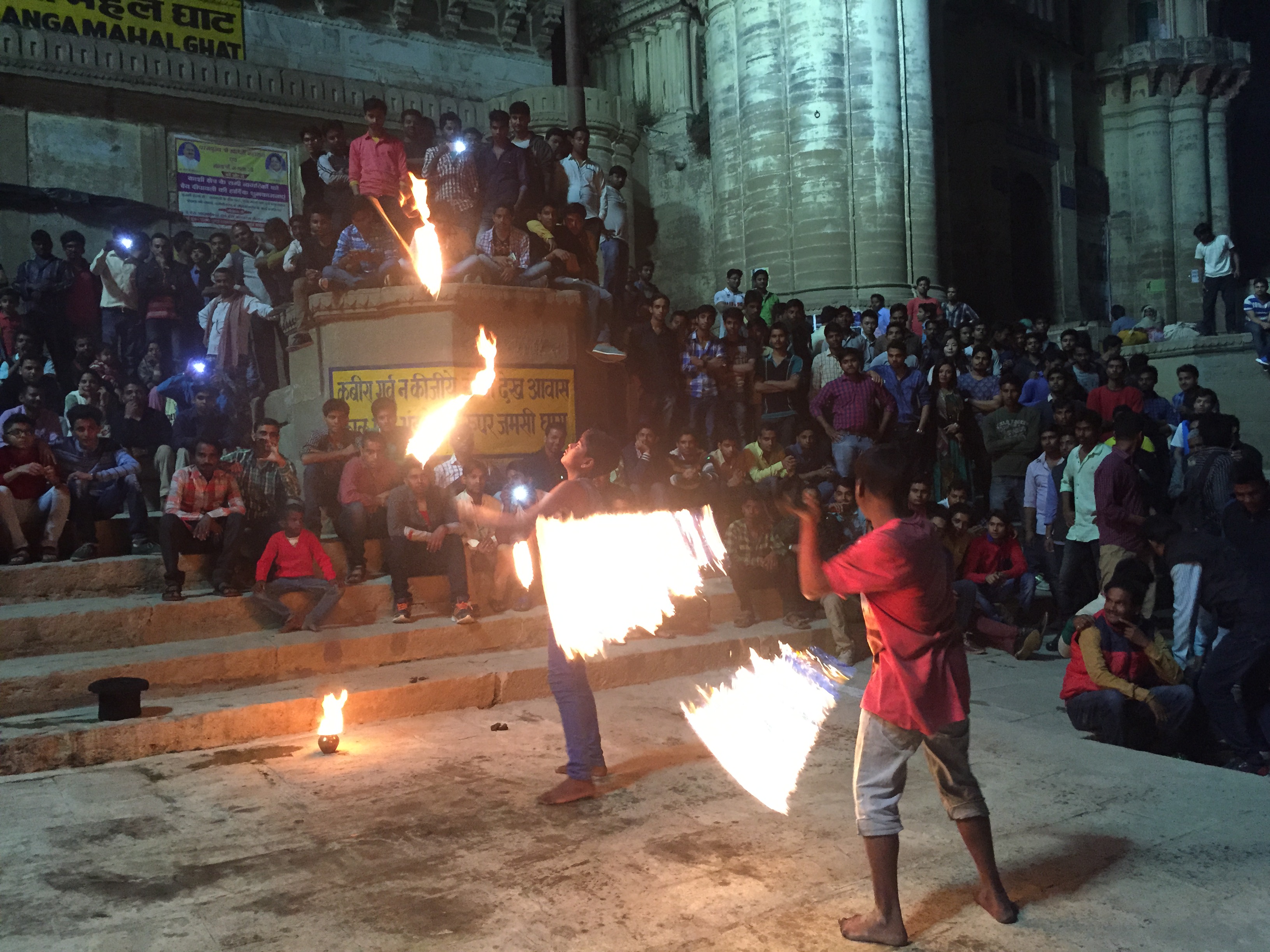 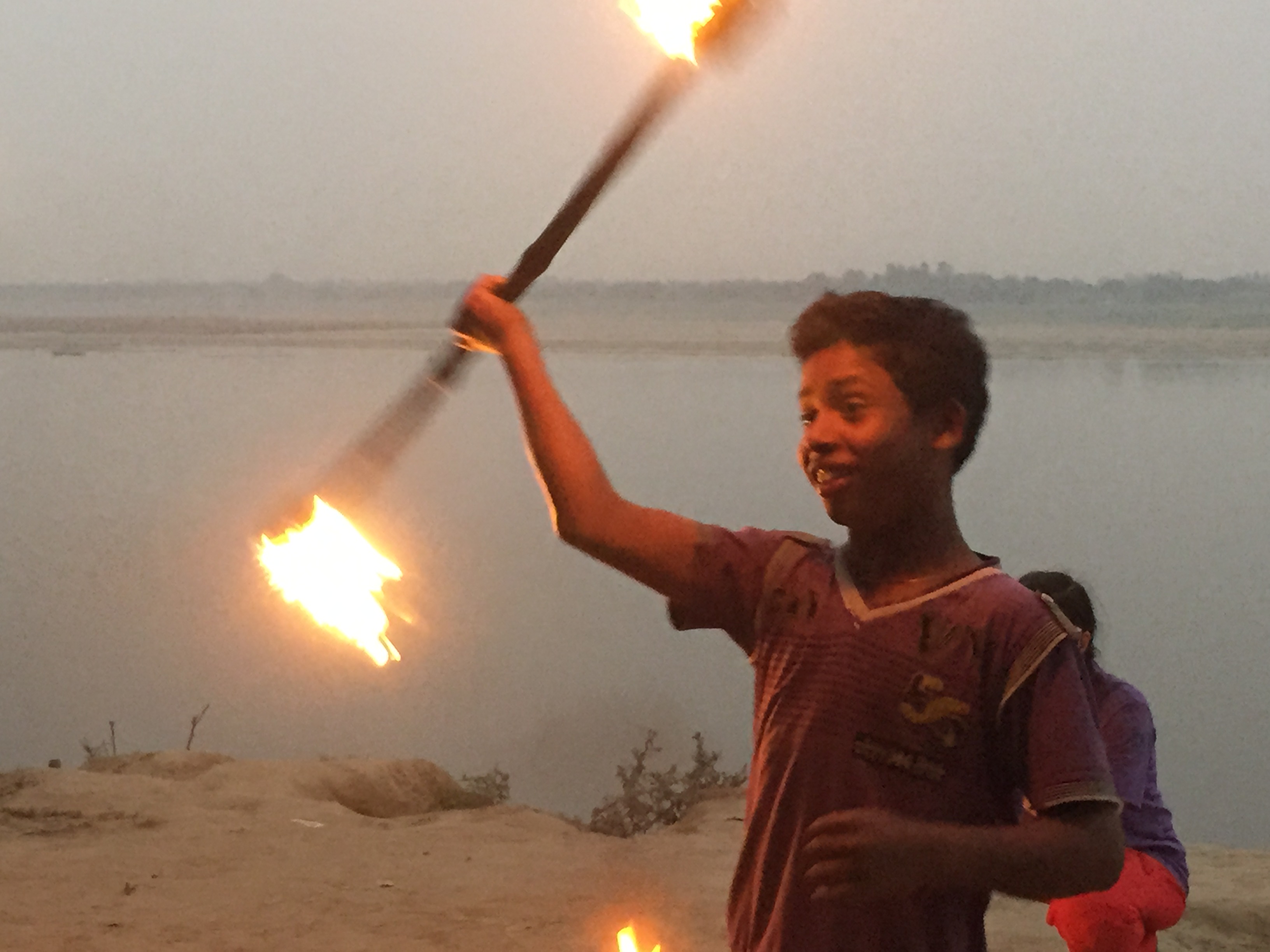 The students at Duniya Education are slightly younger, but also very eager to learn. We spend more time doing group activities with them and playing games, but we are also delving into more advanced moves with props. This week we are going to start narrowing down the skills we teach so they can get more directed attention. They love to do traditional and modern Bollywood dances, so we hope to combine their existing knowledge with prop movement to create some very unique fusions.

The Ghats have become my sanctuary. I go to them for inspiration, solitude, reflection, and action. They are comprised of gorgeous ancient architecture and giant cement steps to the river allowing space for chai vendors and beggars as well as private nooks and corners to sit quietly. When I’m there I feel the pulse of Banaras. I feel the light emanating from the community and culture. I feel the peace of the river and the determination of the city meeting together. 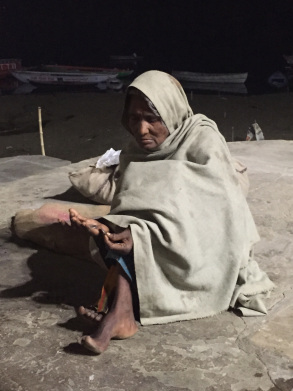 We are truly light-workers working in the city of light.