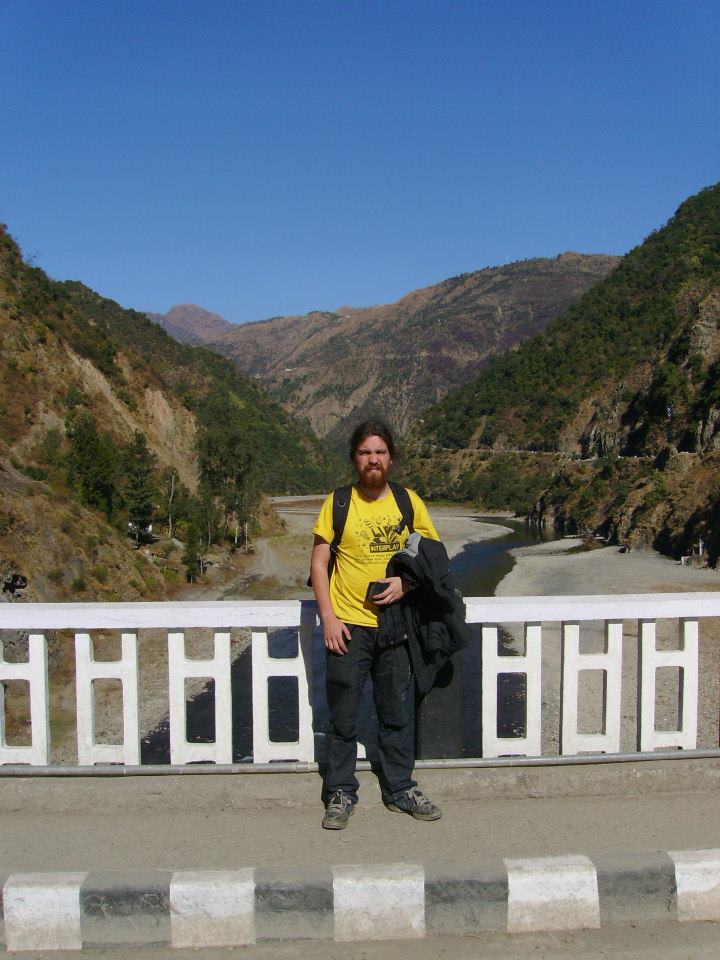 One of our volunteers from the India Team 2017 is currently cycling from his home in Wales, as far as he can towards India – that is, the Turkey/Iran border, it currently being inadvisable to cross Iran solo, on a bike….or any other form, I imagine.

Daniel left Wales on the 22nd September – he is currently on his way from Leipzig to Prague. He has had many adventures already, including getting lost in the woods trying to find a cycle path and his phone dying, having to abandon his bike to find shelter from the rain, being woken by the police and eventually finding a lovely Indian kebab shop owner who charged his phone which meant he could re-find his bike, retrace his steps and finally get on the right road again!

If you like apples between here and the last GPS point there are loads. Hundreds of apple trees, of all varieties and unfortunately not enough of them being eaten. They need to make some cider. Saw one fall off which I ate….

Met a guy who was walking his pet goat and wanted it to be less scared of people but he didn’t speak much english. Was his pet though, he didn’t want to eat it.

Woke up and at 8 am was trying to have a (online) group (skype) chat about India fundraising ideas/logistics with very little success. Other people and me were having connection issues. Sometimes I could hear what was happening but not see others and sometimes vice versa. It was like tuning in and out of a radio station. There was no Wi-Fi in the farmhouse and farms don’t normally have the best mobile signal coupled together with data roaming, but it was nice to see those who I’d be working with in January. Got a shower when cleaning my teeth noticed that they have got some soap with a welsh dragon on it!

………It had just started to get dark and saw an o.k. place to stop and wanted to test out the pocket rocket gas cooking tool that Matthew Price a friend who’s a marine, had recommended getting. Just as a proof of concept for cooking in more isolated areas as I wasn’t that hungry. It was excellent, took about 60 seconds to read the instructions (which was mostly safety information) around 30 seconds to light as I was being really cautious. I was leaning away from it just in case. It was very simple, excellently designed tool that you could use in an instant. I would thoroughly recommend one.

……..Woke up around 11 had some breakfast chilling in my tent till around 11.40 when I hear some german spoken with the word policia …… in my tent I say ‘I understand police but I don’t speak german’ without seeing them. Open up the tent to find two police officers. What are you doing here? I explain. Do you have any forms of I.D.? show them passport. Hang around for 5 mins while their on their walkie talkies. Think they’re not going to do me for ripping up a load of brambles surely? They say they came down as the farmer said he was scared! I don’t wanna scare anyone I said….

Got to Asten, bumped into a guy who I chatted about what I was doing. after finding out, asked me if I wanted to crash in his warehouse..his mum said he shouldn’t let people stay in his warehouse as they may rob the place. But he said it would be warmer than outside and it’s supposed to be a cold night. Not sure whether I should put the tent up in here just for extra insulation. No shower but running water (sink), waterproof and a flush toilet. Plug sockets to charge stuff. Offered to pay him but he said don’t be silly your cycling for charity.

Slept in a warehouse last night owned by a cool dutch guy (him and his daughter). Had 2 beers, charged my phone (even though it’s already almost dead now), charged up my external batteries which are full. took a look around the warehouse, it was huge and then chucked on some tunes. There was no one else about so turned it up loud, my phone was charging and I haven’t listened to music in ages in order to save power for maps and gps. Hit the road and cycled to Germany. Lots of cows and one of the cycle tracks just turned to sand and so was impossible would’ve been ages to go round. Walked the bike for a lot of that section. Lots of pretty flowers about. One of the ferry crossings stopped running half hour before I got there so had to cycle a bit out of my way to get across the river. Cost a whole 70 cents. Happened to get my phone out 10 meters from the border. Last picture is the border on gps…they don’t make a big thing about it. Found a field, tent up, job done.

So was woken up at 6.30 by a farmer who asked what I was doing in his field said I was doing a charity cycle and he said cool, get some sleep then. Woke up again at around 9.30 was up and ready to go by just gone 10 but then bumped into the same farmer, who was wearing colourful clogs and looked like a bit of a character. He asked me if I slept well and I said yes and then proceeded to ask about what I was doing, where I was going and a bit about the charities. We got into an in-depth discussion as he was very interested in the politics, religion, healthcare system and how the UK government sector worked. He very much liked the idea of the NHS. Talked about the EU referendum, Religious demographics of the UK etc. initially I thought I should get going, but after 10 minutes I thought, actually I am really interested in these topics myself, so I don’t mind discussing them in detail.

We talked for over an hour and I thought when was the last time this guy has spoken English? So I asked him…10 years ago. The farmer was 80 and hadn’t spoken English since he was 70 and getting annoyed at himself for calling a lane a track? I tried to keep helping him with lifting stuff but he refused saying he would be unfit if he didn’t use his strength. Bumped into his wife when leaving there at around 11.30 who used to teach English and told her your husbands awesome and clearly holds himself to a very high standard. She then said that’s why I married him. Which was nice…

I went to Wim de Baets shop where he repairs and builds all kinds of different machinery and bikes and he has all the bits and pieces to sort out all of the problems and fixes the bike. Very cool shop repairing all sorts of stuff bikes, washing machines, had a vending machine, welding stuff together as we are chatting. After telling him where I am going for charity he says the repairs was quick and easy and does it for free. During the conversation a guy called Patrick Vercauteren turns up, they are both good friends and he asks me, after finding out a bit about why I am there, if I know about Circus Planeet a youth circus group in Ghent just a few miles away! He says even though it’s closeish it is quite complicated to get to and says he will drive the moped there and just to follow him. Had to go fast on the bike to keep up! Get to the circus place and meet a guy in the courtyard and juggle 7 clubs with him! Then do a class where I help teach a load of young people of all abilities some diabolo tricks. During this time I meet Grauwels Eva a circus performer who after I explain what I am doing says that her flatmate David has cycled from Belgium to Iran around 5 months ago and I can stay at her place! Go there get a shower, wash my clothes, charge my phone, drink a beer, chat to Dave about the cycle and then crash out in the couch. Loads of mosquitoes about downstairs, they loved me…